The Numbing Sameness of It All, Again--Vikings Edition 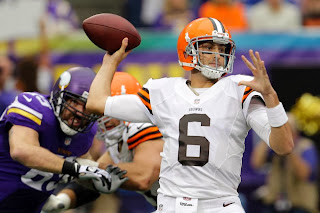 So much about how one reacts to what was surely a stunning victory by the Cleveland Browns on Sunday depends on how full or empty he tends to look at the perpetually slightly filled glass of water the Browns keep by each fan's night table. On the one hand, who knew that Trent Richardson was such a drag on the team? Conversely, who knew Josh Gordon’s presence would give such a boost?

If one is truer than the other, then it would have to be the presence of at least one credible wide receiver in the lineup in the form of Gordon that was one of the key differences. Gordon caught 10 passes for 146 yards. He looked strong after the catch and his presence also opened up the other real receiving star of the game, tight end Jordan Cameron who in word and deed is pretty much everything Kellen Winslow, Jr. was not.

Let’s not bury Richardson though as a drag on the team. He wasn't. He just didn't perform like much of an asset at the time of the trade. And while I consider Richardson’s true value a bit more deeply days later I am stunned by the chart the Wall Street Journal ran on Monday that showed a team’s record after having spent a high pick on a running back. Generally, it’s not been impressive. Surely the Browns' record with Richardson doesn't help the cause but look at it this way. Even with Adrian Peterson, the Minnesota Vikings are only a collectively 47-44 and that’s one of the better records. Ultimately club president Joe Banner merely put into action something that is relatively backed up by the evidence: an elite running back is not nearly as important to a winning NFL team as even a decent overall running game or merely the threat.

Richardson performed for Indianapolis on Sunday as he’s done now for all the previous Sundays he’s been in the league. His yards per carry seem perpetually stuck in the 3s. He may not know the Colts’ playbook, but will that really help? How much did it help here?

So putting aside the obvious dynamic of the presence of Gordon and the absence of Richardson, let’s look instead at the other variables. Surely Brian Hoyer had something to do with the outcome. Indeed he was going to have something to do with it either way. His beautifully lofted third down throw to Cameron accounted for the margin of difference. A more opportunistic Vikings offense might have ended with far more points and put the game out of reach off of Hoyer’s three interceptions.

Still, Hoyer showed more in one game than it’s taken a season to eke out of the surely deposed Brandon Weeden. He led the team on a freakin’ legitimate two minute drill to get the winning touchdown. Good luck finding the fan who thinks Weeden has that skill.

Let us not forget, too, that in his now fifth season in the NFL, Hoyer is still two plus years younger than Weeden. So even if Weeden follows Hoyer’s NFL arc, the Browns are three seasons from seeing a quarterback in Weeden who can loft a ball when that’s what the play dictates and who can recover from spells of awfulness without letting it snowball into head slapping frustration.

Yet it would be hard to pin the victory just on Hoyer or Gordon or Cameron or on Richardson. There was boldness on the special teams to account for. Perhaps the biggest uncontrolled variable was the “us against the world” mentality that surely crept into the recesses of a gobsmacked locker room. Nothing motivates a professional like job insecurity and if Banner accomplished anything last week it was instilling a sense of job insecurity into even Joe Thomas.

Whatever weird combination of cosmic factors and mental gymnastics were responsible for the Browns falling behind in the race for next year’s number one pick doesn’t matter today. Nothing causes a Browns’ fan to forgive faster than a victory, particularly when it was so unexpected. Of course, the same thing can be said as well for a Browns’ fan capacity to overemphasize a victory and its impact on a newly rosy future.

We’re all grown ups here so let’s acknowledge that there’s no way to attach any significance to the Browns’ victory on Sunday without the context of what kind of performance breaks out in subsequent weeks. We know the context of all previous weeks and, frankly, it isn’t very good. It’s why, really, Sunday’s victory, particularly the manner in which Hoyer was able to drive a team down the field like a real NFL quarterback and get a go ahead score with less than a minute remaining, seemed unusual. Past performance, and not just the past two weeks, would certainly suggest that no one knew they had it in them.

But that they did, for at least one game. It’s funny, but the win didn't feel as much earned as it did a bonus. That’s usually true for games one where trickery is involved and that was on display early as head coach Rob Chudzinski dug into the bag of diversionary tricks and created just that, a diversion.

There was the point in the third and fourth quarter where all that had previously gone right for Hoyer was starting to go horribly wrong. The interception he threw from his own end zone on a pass that looked as if it had been thrown by a concussed Pam Oliver, was as predictable as the jokes at Sunday night’s Emmy telecast. The Vikings defense, mostly sackless in every sense of the word, was starting to tee off. Hoyer looked as if he’d accidentally stepped into the middle lane of northbound I-71 at 7:30 a.m. on a Monday.

Then just as suddenly as that all happened it all disappeared. Hoyer regained the composure that Weeden doesn’t ever look to develop and led the Browns on a terrific final drive, continually hitting the right receiver with the right pass at the right time. There have been far prettier drives in the past, just not the recent past.

Even if a win hadn’t developed, the game still would have been a breath of hardy air. The almost abject refusal to advance the ball had all but disappeared. Hoyer, passing as if he had been in Chudzinski’s offense for years, looked mostly comfortable doing so. You could tell he learned plenty watching Tom Brady. There was enough of a running game to keep the Vikings guessing a little.

Most of all, though, there wasn't any point at which you felt as if you were watching a particularly unfortunate episode of Masterpiece Theater. There were actually multiple occasions on which Browns were exciting to watch. Most of last season and the first two games this season were overwhelming in their cringe worthiness. You may not have known what exactly was coming next but you pretty much knew what the outcome of what came next would be. This past Sunday was different. There was no point where I felt the calling to nod off.

And that pretty much sums up the low expectations I usually have for the Browns. If they aren’t boring, I’m thrilled. So yes, the game was a thrill.

The wins, so infrequent as they are, are generally meaningless. They stay with you about as long as a mouthful of cotton candy does. But what does linger is the overall numbing effect of the incredibly bland flavor of football the Browns tend to play. So when they play counter to type, like Charlize Theron in Monster, you notice and in a good way.

Typically, Monday rolled around and Chudzinski, settled in like every Browns coach in the 2.0 era, refused to name Hoyer the starter for next week. He'll do so by mid week I'm guessing. Just as typically, the Browns got the overall mission of 2014 draft positioning wrong by getting it right and now have fallen behind even the Pittsburgh Steelers in the race to number one draft pick. Yet they did so in a way that asserts that when most cylinders click there’s reason to watch well into the fourth quarter. Ultimately that’s all the fans have been demanding for four or five regimes now.

GB: You should change the blog from "Wait 'til Next Year, Again" to "The Numbing Sameness of it all." Just a suggestion!