The Numbing Sameness of It All, Again--Ravens Edition 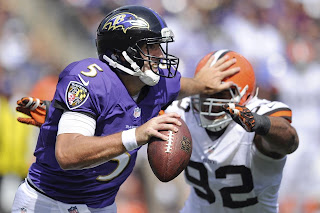 The real trick when writing about the Cleveland Browns is how to extricate yourself from the numbing sameness of it all, again in order to force the fingers to push keys as you struggle to say something, anything remotely new. Watching the Browns lose to the Baltimore Ravens Sunday was to essentially watch the tape from the previous week’s debacle against Miami and try to invent a new angle. It was cruel but not unusual.

Sure there were differences, subtle at best, between the two games. The overarching themes were exactly the same. No greater lessons were learned about this wretched team. Just initial impressions solidly confirmed.

Brandon Weeden is still an awful quarterback. He does enough to make a case for employment as a permanent long term NFL backup though I remain wholly unconvinced that he’s the kind of second stringer that you wouldn’t mind seeing play once in awhile. He’s actually the kind of backup that should play behind guys like Aaron Rodgers or Peyton Manning, quarterbacks not typically prone to injuries. If Weeden’s in charge, dread is hovering.

Weeden had a statistically insignificant day in the sense that he completed a fair amount of passes for a fair amount of yards and didn’t suffer the indignity of adding to his burgeoning wrong-sided touchdowns to interceptions ratio. Where he wasn’t insignificant though was in making plays that absolutely had to be made if this offense will ever be thought of as anything other than incompetent.

How a professional quarterback, a first rounder at that, could absolutely whiff on a cupcake throw to a running back who had nothing but green grass and high tides in front of him in Chris Ogbonnaya is nearly beyond comprehension.

Does Weeden simply not listen to his coaching staff when they implore him weekly to develop touch and occasionally do something other than try to throw the ball through a brick wall on every pass? Is he uncoachable or simply untalented?

The kind of miss on the Ogbonnaya disaster captures in a simple sequence exactly what’s wrong with Weeden. He seems intellectually to understand the throw that’s supposed to be made, just as he seems intellectually to understand generally the nature and flow of the offensive schemes that Rob “Chud” Shurmur has designed. What he can’t do except in the least pressurized situations is turn intellect into execution.

The sum total of a quarterback’s existence, from high school to the pros is to make that pass. Sure there is a lot of moving pieces and parts to the position. Reading defenses is important. So is remembering the snap count. Ultimately, though, when the team needs its quarterback most is when a big play beckons. The line of demarcation between the good and the also ran is the ability to make that play.

What makes Monday’s key failure so distressing, so utterly soul drenching, is that the miss to Ogbonnaya affirmed that Weeden hasn't improved one iota from last season to now. There has been no second year upgrade in ability. The numbing sameness of it all, again.

But because this is Cleveland and because it’s the Browns, the starving fan base clings to any glimmer of progress even as it takes to the airwaves to vent a perpetually full well of anger. So in that vein we look to the insignificant improvement in Weeden's passing stats as we look to the other contributory factors as to why the Browns loss. There are always other contributors. Let’s face it, it’s not like the Browns are merely one player away.

You could start with the back up running back that is Ogbonnaya and criticize him for not having the sufficient skills to catch a fastball barehanded, even if he was only expect the soft toss that would have been more than adequate to make the play. All true and yet let’s remember his role. He’s the back up running back on a really bad team. Where exactly do you think that puts him in the ranking of the 1600 or so active players in the NFL today? Doesn't that just emphasize why a supposedly pedigreed quarterback like Weeden has to make a better throw?

Then there’s the usual culprit of the offensive line, especially the right side of the line. Mitchell Schwartz and Oniel Cousins may be the two worst offensive linemen in a generation and they are playing next to each other. You could leave a stick of butter sitting on the counter and then microwave a knife for 5 minutes and that knife would still find more resistance cutting through that stick of butter than opposing defensive linemen find from the Browns’ right side.

It would appear as though the Browns have no other options but Schwartz and Cousins at the moment but that can’t possibly be true because there is no one worse. I suppose the Browns could sign others who’d play just as bad. Indeed that’s exactly what I’d expect them to do. They have a track record. But go ahead and sign others anyway. The Browns have no particular strategy that doesn't start with the word “if…” so signing anyone else, and I mean anyone else, would be reflect both the crapshoot nature of this franchise and could just work. Hell yea it could. Go buy some tickets now.

And where would this team be without the scary talent of Greg Little? Actually they’d still be 0-2 but that’s beside the point. Little is a really, really unique receiver if by unique one means he can’t catch. To call Little a receiver isn’t to just insult the Larry Fitzgeralds of the world. It’s also an insult to the Fair Hookers of the world.

You can’t even make the case that Little is Braylon Edwards without the attitude. Little has plenty of attitude. It’s why he was available to the Browns in the first place, another reclamation project of the old regime. At least on that rare occasion Edwards would actually make a catch that was difficult. Little hasn't even reached that level of maddening inconsistency, except of course with his driving ability. Little once again and despite previous assurances gathered in a bunch more motor vehicle violations early Monday morning, most notably driving on the license that was suspended for all the other infractions he had. He’s awful and deserves to be benched and then cut.

The play calling was again suspect with Trent Richardson carrying only a slightly higher level workload in a game that, like last week, was close for three quarters. The Chud and Turd monster aren’t keen on Richardson; that much is clear. Yet there’s no one else on the roster and if nothing else the threat of a commitment to use your number one pick from last season on a consistent basis could take some heat off of Weeden. If anyone could use less heat, it’s Weeden.

What was perhaps more confusing about the play calling though was the formations used. All off season fans were told that Weeden was a shotgun quarterback and having him play behind center was akin to having Bruce Springsteen play a banjo. Indeed, last season Pat Shurmur rarely had Weeden play out of the shotgun formation. This season is somewhat a different story but not nearly as much as fans were sold, if the first two games are any indication.

What is instructive is that in actuality when the Browns are running their “regular” offense, you know the one that you see for most of the game as compared to the equally inept version that rears its ugly head just before the half or at the very end of games, Chud and Turd are as likely to put Weeden behind center as they are in the shotgun.

If Weeden’s strength as a quarterback lies mostly from the shotgun (and we’re taking a huge leap here that he has particular strengths as a quarterback) then why aren’t Chud and Turd taking greater advantage of it? They seem to prefer the shotgun formation when the team has to score and is pressed for time, such as near the end of each half of the game. Why isn’t that good enough the rest of the time, particularly when you have a fairly immobile quarterback playing behind a porous offensive line who needs all the head start he can muster before getting pounded once again?

The Browns’ offense may be a work in progress but it’s perfectly unclear what it’s progressing to. Chud and Turd don’t really know what to do with Weeden and their play calling is the best reflection of that. In other words, Weeden wasn't Chud and Turd’s first choice to play quarterback. For all intents, Weeden is to quarterback on this team as Schwartz and Cousins are to the right side of the offensive line on this team.


But these are really all the details that don’t amount to much difference. The Browns lost this week in very much the same way they lost last week and likely the same way they’ll lose next week. But they have sent a message to their fans and the league. Nothing’s changed in Cleveland including the numbing sameness of it all, again.
Posted by Gary Benz at 7:52 PM