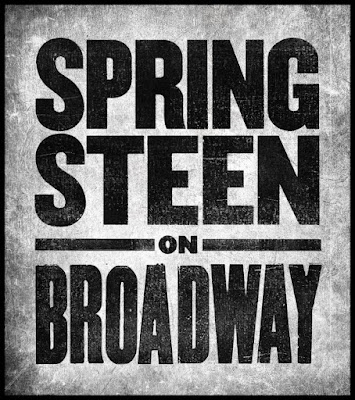 Sometimes it all just makes sense.  That’s the most dominant thought I’ve been contemplating for the last few days following the remarkable, stunning, beautiful show Bruce Springsteen performed at Broadway’s Walter Kerr Theater on Saturday night.  There was clarity achieved, a state of mind deeply contrasted with the usual unsettled mind that had invaded nearly a year ago.


I can’t tell you exactly how the pieces all fell into place, can’t tell you if they’ll stay there and can’t really say it wasn’t all just a dream.  I do know that for those two plus hours on Saturday night and for the many hours since, life made sense for all the reasons life doesn’t seem to make much sense most of the time these days.  You can fall wherever you want on the political spectrum, I tilt decidedly left, but you can’t help but acknowledge how unsettled each day seems to be.  A candidate who promised to disrupt the Washington D.C. status quo if elected has instead disrupted much of the status quo of the nation.  Nothing seems safe, nothing seems sacred and it’s becoming increasingly difficult to understand who we are, what we’ll do and what we won’t.


Yet somewhere around 8:15 p.m. on Saturday night, life gelled again and the feeling carried over and into the next day and then the next, dissipating some but resilient enough to keep comfort still.  I imagine with time the mostly jumbled mess will return.  For now, though, I’ll enjoy.


To say that Springsteen’s performance was a revelation is far too much of an understatement.  It’s probably not even the right word.  Springsteen is a known commodity after all.  But there is still the power to amaze, to educate and, yes, to reveal greater truths, to shake you out of the stupor and haze that envelops.


I’ll admit, I’m an uber fan, unquestionably.  Another writer once chastised others who tried to establish street cred by tossing out the number of Springsteen shows attended, so I won’t.  Let’s just say that this is a carnival I’ve followed many, many times from the late 1970s.  And while I’ve borne witness to every kind of Springsteen show imaginable, nothing before it and yet everything before it set me up for what’s taking place 5 times a week on Broadway.


It’s not a spoiler alert to say that Springsteen on Broadway is no rock concert or greatest hits show.  It owes far more to the tradition of great Broadway musicals than one might suspect and yet it’s bent and twisted that typical construct in ways that could influence musical theater for years to come.


The show is Springsteen’s recent autobiography, Born to Run, come alive in wholly unanticipated ways. In almost linear fashion it follows Springsteen’s rise from a young misfit in Freehold, NJ, molded mostly by the dynamic of a late-in-life discovered mentally ill father and preternaturally cheerful and optimistic mother.  It’s not the usual celebrity biopic arc of a talented kid driven off course by drugs or booze or evil management only to rehabilitate and rise again.  It’s the story that’s far more typical to most everyone’s existence.  You get the sense as he tells the story that Springsteen is as much mystified by not just its roots but its outcome as anyone.


Threaded through the various soliloquies are roughly 14 or so songs chosen, in the tradition of great musical theater, specifically to advance the larger narrative.  This is not a concert. It’s a drama, it’s a comedy, it’s life and it’s punctuated with the best soundtrack imaginable.  “Growin’ Up,” the lead single from his first album provides the overview of the story but throughout the music, familiar to the hardcore fans but perhaps much less known to the more casual fans, perfectly captured the essence of life that remains mostly a mystery to Springsteen.  There were songs of life, love, sex, hope, dread and daily living.  Playing either his guitar or seated at the piano and accompanied by his wife, Patty Scialfa for two songs, Springsteen coaxed deceptively ornate arrangements from the simplified acoustic set up.


There wasn’t necessarily any one moment when your jaw just dropped because, frankly, the jaw dropped from the opening words to the closing chords of Born to Run and didn’t fully engage until hours later.  It was a Halley’s Comet kind of night.  You knew you were witnessing something that occurs maybe once in a lifetime and it’s almost impossible to place it into historical context except as an outlier.


But what is very clear is that this really isn’t a show that Springsteen could have performed at any other time in his life.  Springsteen’s story isn’t completed, certainly.  But the life that’s been lived is full and rich enough to inform whatever chapters remain without disrupting the overarching themes.  The sheer bravery of the performance is likely what I’ll remember most.  Springsteen spent some time talking about the masks one wears in life as a suggestion for a philosophy he adopted long ago, trust the art not the artist.  But the ability to honestly connect requires equal measures of bravery and honesty.  So much of what it takes to be a master performer is the ability to create that credible façade.  That ability is hard earned, indeed only earned, if you’re willing to lay your truth bare for others to see and contemplate for themselves. You wear the mask but sooner or later it just becomes your life.


That Springsteen recognizes this inherent irony is evident from the outset.  Self-deprecating almost to a fault, he “jokes” at various points about being a person who has written extensively about the working man without ever having held an honest job; about writing about cars while not even having a driver’s license; about running and yearning to be free and now living about 10 minutes from where he grew up.


The audience, of course, gets the joke while also giving him supreme credit for doing the incredibly hard work of being a gifted observer and journalist, finding the truth in every day life and communicating it in a way that resonates.  If his songs aren’t purely autobiographical, they are well informed by his life and the many that surround him.  To take the little truths and broaden them into something more universal for others to learn their own truths is every bit as honest and hard labor as those that dig the ditches.


When it’s over, though, you’re left in the same place he is: contemplating the magic and mystery of life.  Why him and how?  Malcolm Gladwell, in his book “Blink,” writes about the ability to create seemingly out of thin air, about not letting your conscious self interfere too much with the internal computer that guides one’s ability to think, judge, and react.  It’s a difficult task for most but leaves you almost gasping for air when you see it in others.


And that’s where it left me, two hours later, gasping for air.  There were any number of moments when I was left teary-eyed by not just the moment but the collection of moments from all the shows, all the music, all the time, really, that I had invested over the decades. It was life affirming and not because any greater truths were necessarily revealed but because all the truths on which I had relied were confirmed.


In a particularly poignant moment in a night built on poignancy, Springsteen alludes to the current political strife without naming names.  While acknowledging how unsettling it all is, he sees it as just a dark chapter in a much larger book while then launching into perhaps both his greatest and most underrated song, “Long Walk Home.”  That was the moment I realized that it all made sense.  Days later, it still does.
Posted by Gary Benz at 6:00 PM No comments: Links to this post