The Numbing Sameness of it All, Again--Bengals Edition 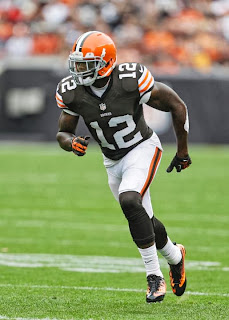 Irrespective of venue, the surest way to lose money in a high/low game of poker is to choose the middle course, or worse to shift course once committed.

When the Cleveland Browns traded Trent Richardson (20 carries, 60 yards on Sunday, a tidy 3 yards/carry, again), it seemed that they had committed to go low to improve their lot in next year's draft. But with another improbable win against a supposedly improved Cincinnati Bengals on Sunday the Browns find themselves tied for first in a poor division and probably pondering whether to shift course and now go high.

I liked the version of the Browns that had committed low because it met perfectly with overriding expectations that the NFL universe had for them. Who but the Browns keep building for a tomorrow that never comes? I mean who other than nearly every Cleveland sports team of the last 30 years.

But there they were again, stodgy for long periods of time on offense and stout on defense as they gave another team a case of the Mondays. That makes an actual but modest win streak for a team that looked not just lost but buried for its first two games. Now fans are left to contemplate how a season that was supposed to be spent planning for future seasons yet unplayed went so horribly wrong. It is a shock to the system.

The Browns confound when they win because even the fans can’t believe what’s happening. An incredibly long and effective drive in the fourth quarter to seal a win against what was supposed to be an otherwise formidable (and favored) opponent is not how fans in these parts are used to spending the run up to the 4 p.m. games. That time is usually reserved for a quick bit of yard work or sandwich making before watching the league’s better teams and players square off.

So now the Browns do face a dilemma of sorts, don’t they? The first quarter of the season has all but eliminated the Owen Steelers to jockeying for draft position. The Baltimore Ravens gutted a Super Bowl team of most of its best players, either by design or retirement, and now rely on a misplaced faith in Joe Flacco to impersonate Tom Brady and make due with a cast of rejects. Yesterday's loss proved that's a flawed approach. And the Bengals, who knows what to make of them accept that they couldn't solve a Browns team that hasn't been much of a puzzle to anyone except their fans.

It really is a season the Browns, even a 7-9 Browns, could make the playoffs if only somewhat by default. The AFC North is that winnable at the moment. But doing so or even getting close comes at the expense of the draft choices they coveted. The answer, I suppose, lies in the fact that players and fans are in it to win as much as they can now and let the future roll out as it’s meant to when it’s meant to.

It’s the rare set of circumstances that line up just as they should to yield a result that was too speculative to contemplate. The Cleveland Indians of this season are probably the best example of that in a generation. So holding the eggs for a basket that might never come anyway isn't worth the chance. The only advice though is if the Browns are now committed high stick with it for awhile. Keep any further trade talk in check. Clean out the deadwood if you must, but keep this crew more or less in track and Brandon Weeden on the bench. Let at least another quarter season take place. Tanking the last 8 games, which is easily accomplished by re-inserting Weeden if/when necessary, can still yield powerful results for the future.

Here’s what informs that decision and admittedly it's a series of slender reeds. There’s the aforementioned weakness of a division that is actually worse than the American League Central was this year. But next and not insignificantly it’s the team.

Whether quarterback Brian Hoyer is the real deal or just Kelly Stouffer remains to be seen. What is far clearer is that receiver Josh Gordon does make a distinct difference and that Bill Belichick is somewhere today plotting exactly how to wrest tight end Jordan Cameron from the Browns’ grip. Cameron is the kind of talent that Belichick has built a career finding. Players like that don’t usually fall into Cleveland’s lap, by accident and especially not by design.

There’s also the defense, generally, and the magnificently named Barkevious Mingo, in particular that seems to have opposing teams rattled or at least caged in. Mingo has had a sack in 3 straight games but his presence is even bigger than that. Mingo just enhances a strong defensive line and the linebackers, particularly but not exclusively D’Qwell Jackson, have been so effective that they are covering up a really weak secondary. Buster Skrine continues to underwhelm. Sure he had a key interception yesterday but not to pick nits he was in position to grab the deflection because he had lost sight of his assignment. Had Bengals quarterback Andy Dalton given it a half second more there was a longer completion to be made against the confused Skrine.

On the other side, though, is a running game that will be hard pressed to get appreciably better. Willis McGahee is simply too old in NFL terms to be consistently effective. He’s Jamal Lewis in his last season, more or less. Chris Ogbonnoya will never be anything more than a change of pace back.

It will eventually fall to Hoyer to buy time, which he seems quite capable of doing, as he looks off Greg Little and gets it to Gordon or Cameron or even Travis Benjamin. On Sunday, Hoyer threw short to Benjamin and he turned an otherwise pedestrian NFL stock plan into a 33-yard gain that eventually led to the Browns’ first touchdown.

There were two other key points of note in that series, though. First was the 17 yard pass to Devon Bess from Hoyer that got the ball to the Cincinnati 2-yard line. That followed by what is now becoming routine, the Hoyer to Cameron end zone connection. Cameron simply has excellent style and skill in the red zone. He’s difficult to cover or even account for.

Later in the second quarter came a spectacular 33-yard completion from Hoyer to Gordon on a ball that probably shouldn't have been thrown. But having decided to throw it, Hoyer put it in a position, despite the double coverage and with Adam “Arrested Again” Jones step for step, where only Gordon could make the catch. It was a difficult leaping catch but had it not been completed it wouldn't have been intercepted, either.

Kicker Billy Cundiff killed the momentum of the moment by demonstrating why he was available to the Browns at such a late date. His 37 yard miss on a field goal didn't
inspire much confidence. He’s safe for another week I suspect. The Browns play again Thursday. After that, he ought to prepare to watch others try out for his job.

Those were pretty decent highlights among an otherwise yawn inducing display of football by both teams for most of the game. But far better, far more fulfilling and far more important to the overall direction of the club this season what the drive that sucked up 6 and a half minutes of the fourth quarter and ended up with the Hoyer to Ogbonoyya touchdown.

From the Browns’ 9 yard line the drive started conservatively and predictably enough. Head coach Rob Chudzinski had a lead to protect. A short pass to Cameron. Then McGahee ran for 5 then 4 yards and suddenly a little life sparked. Then Hoyer to Gordon for 13 yards and two plays later to Cameron for 31 yards. At the very least field position had been altered.

Then McGahee ran three straight for 23 yards total followed by a neat little pass to Ogbonnaya for a 1-yard touchdown and suddenly an insurmountable lead emerged even though just under 5 minutes remained. Cincinnati, unable to move the ball all day, likely was banking on the Browns’ defense taking its usual fourth quarter siesta. Instead they played as if they had plenty of sleep the night before and shut the Bengals down once again.

It was a good fundamental example of football by a team with whom the words good and fundamental rarely crossed paths.

The question now that keeps popping up is whether the Browns can demonstrate to a relatively large national audience on Thursday against the Buffalo Bills that it’s new go high strategy makes perfect sense. In a league where the Steelers are Owen Four and so are the Giants, sure, why not?
Posted by Gary Benz at 7:54 PM