Save the Sympathy For Someone More Deserving 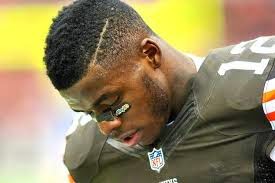 He's Not Number One 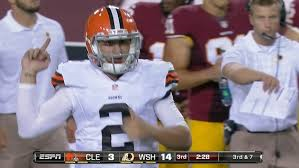 Cleveland Browns head coach Mike Pettine on Wednesday confirmed what was obvious to the entire nation on Monday night.  Johnny Manziel should not and will not be opening the season as a starting NFL quarterback, even for a team as woeful and as quarterback-challenged as the Browns.
Manziel was never going to open the 2014 season as the Cleveland Browns’ starting quarterback anyway.  Never, ever, ever was it going to happen.  Manziel should probably publicly thank Pettine for saving him from another embarrassing chapter of the tragicomedy that is slowing developing in Berea with Manziel as chief protagonist.
To say the least, Manziel needs seasoning.  To say the most, he needs to grow up.
Pettine will never admit that Manziel flipping the bird at the Washington bench on Monday night in the second half of a preseason game for goodness sakes tipped the scales.  And it probably didn’t, but only because it wasn’t as if the scales were otherwise in balance.  What Manziel’s act did do was highlight exactly the problem with him at the moment.  He lacks both the maturity and the mental makeup to take on the role of starter.
It’s actually pretty comical when you think about how Manziel responded to the taunting from an opposing bench in a meaningless game.  Lacking any wit or sense of subtlety he gave the typical 14 year-old R-rated non-verbal version of “oh yea?”   Clever stuff, Johnny.  I’d have more respect for him if he had made a joke about their mothers.
More to the point, though, is it demonstrated exactly how easily it is to get inside the head of Manziel.  That shouldn’t be such a surprise.  It’s clear there’s ample room if only, but not only, because Manziel didn’t exactly spend the filling it with anything remotely work related.
This little comeuppance for Manziel, as inevitable as it was expected, puts him at a crossroads now, perhaps the first time he’s actually faced one in his life.  What he does next, which path he chooses, could very well determine if he becomes just another wasted first round pick by the Browns or the one true player around whom this beleaguered team can finally rally.
The one thing working in Manziel’s favor on this score is that he does seem to understand how vast his shortcomings clearly are at the moment. In his interview with Jon Gruden broadcast on ESPN Manziel candidly pointed out how little grooming he really had at Texas A&M for the pro game.  His college team didn’t huddle.  He never took a snap behind the center.  The playbook consisted of plays whose proper execution relied mostly of Manziel running around long enough to either find someone, anyone who might be open or taking off himself.  That amazing lack of precision to the college game just doesn’t translate to the uber-scripted world of the NFL and Manziel knows it or at least he does now.

In his comments earlier Wednesday, Manziel was similarly candid, saying he didn't do enough well on the field to earn the nod.  Indeed he admitted he probably wasn't ready to be a starter.
What makes all this so curious then is why Manziel used his offseason so frivolously.  He seemingly knew how big of a learning curve he had to overcome and instead of spending as much time as possible to make that leap he spent most of his time dicking around various nightclubs around the country.  It’s the kind of approach that someone who feels overwhelmed by what he faces tends to take.  Gravitate toward what you’re comfortable with while avoiding what you aren’t.  And if anything about Manziel is crystal clear he’s comfortable at a party.

He also made that point in his remarks Wednesday and in typical fashion he zagged when he should have zigged.  He was definitive, if not a bit defiant, in defending his offseason conduct, claiming it made no difference in the outcome and didn't impact him at all.  Indeed he said he wouldn't change a thing and vowed to essentially spend next offseason doing the same thing.
It's difficult at times to harmonize the candid, contrite Manziel with the defiant borderline idiotic version.  He knows what to say except when he doesn't.  Immaturity, perhaps, but it's more than that.  It's the reason actually scouts were so mixed about him in the first place.

But let's get back to facts.  It’s not that Manziel didn’t put in work during the offseason.  It’s that he didn’t put in nearly enough, irrespective of what he says now.  No one expected Manziel to display veteran poise at this point.  But neither should fans have expected Manziel to look as lost as a guy off the street on Monday night.  There’s a reason Pettine used the middle of August to name Hoyer as the starter.  There was no effective other choice and given how far Hoyer still needs to come the time to stop taking away reps from his was now.
Nothing about the way Manziel has performed thus far suggests he’s even close to being a credible NFL quarterback anytime soon.    That’s not to say it couldn’t happen but short of an injury it won’t or at least shouldn’t happen soon.  The one thing Manziel doesn’t need now (not to mention Hoyer) is any sense from Pettine that the move to Hoyer is less than permanent.  If past is prologue, though, more time will be spent soothing Manziel’s rather fragile ego than giving the tough love he actually needs.
Look, the red flags are everywhere with this guy and rather than treating him like a savior he needs to be put in his place.  Pettine, general manager Ray Farmer, even embattled owner Jimmy Haslam, did an awful job this offseason reigning him in almost going to great pains to sanction the behavior as appropriately aged-based.  The behind the scenes story is that none of them were pleased with his antics and yet they waited until Manziel arrived for training camp, partied out and ill prepared, to tell him that.
Similarly, there is the issue of Manziel’s missing of a team meeting last week, reminiscent of his missing an early meeting at the Manning quarterback camp last summer and, of course, the middle finger incident.  In short, nothing about Manziel screams leader including his statement Wednesday that his partying ways would continue.
I’m sure Pettine would say that these matters have been handled internally but there’s nothing publicly to suggest that Manziel has gotten the message.  Besides, there’s nothing wrong with a coach taking a calculated approach to calling out a player publicly, particularly a player who is supposed to be leading by example instead of acting like one of the bad asses in the back of the bus throwing spit balls when the coach isn’t looking.  It worked well for Bill Parcells and Bill Belichick to publicly challenge a few players from time to time.
Manziel needs to see this moment for what it is and get on the right path, publicly and privately.  Outwardly he doesn't.  He needs to come out and candidly admit he didn’t work hard enough and just as candidly re-dedicate himself to living up to the trust and faith that has been placed in him.  He didn't.

A bit of advice for the rookie.  The fans, particularly in Cleveland, are a forgiving bunch unless you’re a dick.  It’s why they still stick with Bernie Kosar through all his problems and still can’t stand Braylon Edwards.
Posted by Gary Benz at 7:05 PM No comments: Links to this post