If you’re going to come out of retirement, even briefly, it should be for a very good reason.  A year ago, almost to the day, I took a break.  The Cleveland Browns were setting themselves for historic failure, again, and the numbing sameness became too much. 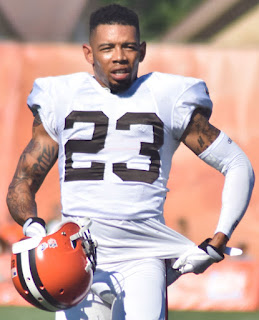 The Cleveland Indians got themselves to the very edge of a World Series victory and that didn’t pull me back in, although the victory probably would have.  The Cleveland Cavaliers getting into the NBA Finals didn’t do it either.  And yet here we are a year later and I was pulled back in by this:  Today the Browns released beloved cornerback and all around good guy Joe Haden.  It’s not the loss of Haden so much as what it represents.  It’s the clearest signal that Browns finally are serious about improving.

This shouldn’t be a pitchfork moment for anyone.  Stripped of sentimentality Haden has been in decline for years. That decline accelerated most certainly because of injuries but the decline has been clear nonetheless.  It’s been a bit sad watching it because Haden was one of the few positive things about watching the Browns for many, many seasons.  But the game takes its toll on all players and Haden’s time has come. He wasn’t worth the $11 million he would have been paid for this year and he wasn’t willing to take a pay cut to a more reasonable number.

By releasing Haden now the Browns showed the cold heartedness best exhibited by Bill Belichick and the New England Patriots, the benchmark for the entire league.  It’s better to move on from a player just before he’s done then after.  Many consider Belichick the consummate prick because he is so willing to cast aside team and fan favorites in the pursuit of victory.  The list is long and distinguished but know this much: Belichick has rarely if ever been wrong.  The players he’s discarded have not gone on to prolonged glory anywhere else.  Either will Haden, despite all the nonguaranteed and less money showered on him by the Pittsburgh Steelers.

There’s little doubt that Haden would probably have contributed something to this year’s defense.  He’s a good player to have in the locker room and was a visible and positive influence in the community. There’s also little doubt that his contributions, whatever they may have been, wouldn’t have made a lick of difference in the won/loss column which, as Belichick knows, cures fans’ hurt feelings more quickly than anything else. The Browns may be improving, slowly, but having Haden simply doesn’t move the needle.  What his release does do, for once, is give the Browns an opportunity to find a replacement without the baggage and temptation to appease a complaining fan base to play a fan favorite at the expense of developing the future.

The other news the Browns made today was the dumping of a number one draft pick, offensive linemen Cameron Erving, to Kansas City for a 5th round pick.  That’s good value any way you slice it.  If/when the Chiefs have to play Erving they’ll find out something every Browns quarterback who lined up behind him did.  Don’t run any plays in his direction.  Design every quarterback rollout to go in the opposite direction.

Dumping Erving will make far less noise than when the team parted ways with Johnny Football but it’s no less noteworthy.  When it comes to offensive linemen, first round busts are hard to find.  They exist, certainly, and there’s little doubt that the Browns would be the one team to find one.  But they are hard to find.  Indeed it’s one of the easier positions to scout.  Cleveland.com posted the press conference when a leading candidate for worst general manager in Browns’ history, Ray Farmer, touted Ervin’s incredible versatility.  That video is revealing also for the shell-shocked look on former head coach Mike Pettine’s face as he tried in vain to support that thesis.

That commentary aged about as well as a Trump tweet.  The only versatility Erving showed was that he was an unworthy first round pick at any position along the offensive line.  But know this.  Erving was every bit the bust as Manziel.  He simply went about being so in a much quieter fashion.

None of this means the Browns will necessarily show significant improvement this season.  The team does have an incredible number of upcoming draft picks though and while virtually every regime since the Browns 2.0 were launched has blown the vast majority of picks they’ve had, there still is hope.  Success in the NFL is a slow, steady climb.  It takes the kind of thinking that understands the value of draft picks, the need to not be ruled by sentimentality and the courage to correct mistakes quickly.  Let’s hope all of this doesn’t end up being an anomaly, you know like it’s been in the past.
Posted by Gary Benz at 7:00 PM No comments: Links to this post