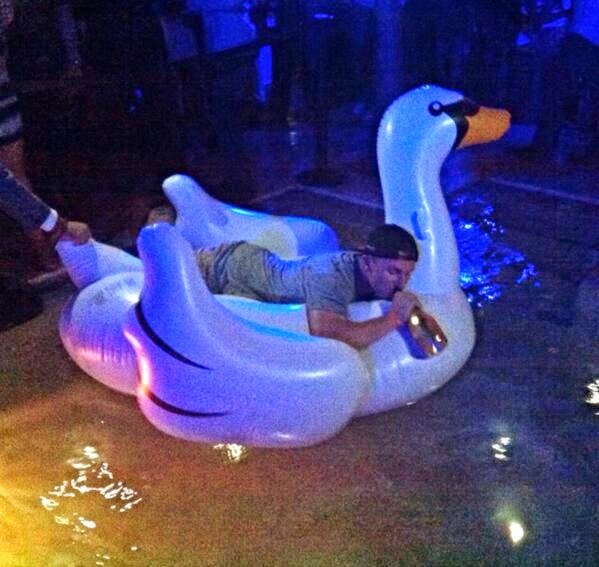 The Cleveland Browns’ Johnny Football is the new Johnny Paycheck, having just signed a 4-year $8 million contract with just over $4 million of it guaranteed.  That means we’re about 4 months away from someone, Manziel’s agent for example, looking to redo it on the heels of a couple of completed passes, one of which was for a touchdown.
But on the plus side we’re probably mere weeks, maybe days, away from Johnny Paycheck doing something completely stupid and over the top with his bonus money.  Think Steve Martin’s Navin Johnson character in The Jerk after he became famous, just gaudier.
The last time I visited the status of Cleveland’s premier party boy, Manziel, he was an unsigned gallivant building brand awareness as this generation’s Joe Namath, but with an Instagram account.  In the intervening weeks about the only thing that’s changed, other than a relatively modest rookie contract based on his relatively modest draft status is that his head coach, Mike Pettine, named Brian Hoyer the starting quarterback heading into training camp.


Ok, another thing changed.  Slowly, methodically, the players are aligning behind Hoyer to the exclusion of Manziel, lineman Paul Krueger being one, former Browns’ quarterback Brady Quinn being another. Neither were particularly negative but the first shots across the bow by players who have been there.
Krueger criticized by his constant positive references to Brian Hoyer.  It was telling.  Quinn was more direct, rightly noting that others in the locker room tend to look to the quarterback and how he conducts his business and right now most of Johnny Paycheck’s business is of the drinking, partying and carrying on variety.


Manziel will try the patience of his fellow players, the coaching staff and the fans on a daily basis.  He already is.  Every time a player or Pettine has to respond to a media inquiry about Johnny Paycheck is a minute that Pettine could have spent on almost anything else.  This is a franchise, a coaching staff, a roster that can’t afford any wasted minutes and Manziel has used up any reasonable allocation already.
The arc of these sorts of things is always the same.  An immature kid with too much money pushes the limits of his new found status.  At first it seems reckless but in a fun, vicarious sort of way.  Think Manziel on a floating fake swan, for example.  Over time it goes from amusing to bemusing to vexing as losses mount and interceptions, fumbles and injuries mount.


There is absolutely no doubt in my mind that Manziel will follow this rather predictable arc.  He’s well into phase 1 with as he constantly reminds those who ask that he’s young, single and what’s the harm?  There is none until there is some and there will be some.
The only real question is how long it takes to get through this arc with Manziel.  He may think he’s working hard when he’s not otherwise playing hard but the truth has a way of revealing itself either way.  You can’t wing a NFL career.  You either take it seriously or it spits you out prematurely.


Training camp doesn’t open for another 5 weeks.  That means 5 more weeks of Manziel in borderline embarrassing situations and 5 more weeks of wondering whether this guy is hell bent on partying himself out of the league before he ever sees an actual field.
Manziel’s a young guy and should have his fun.  But he’s not a college guy anymore.  He’s taken his talents to the professional level and eventually needs to act that way.  He seems to have modeled himself after the New England Patriot’s Rob Gronkowski.  That hasn’t been working out too well for Gronk these days as he suffers through injuries one season after another.


It’s a legitimate question and hope that Johnny Paycheck can stay on the field more than Gronkowski.  But the more immediate question is when he’ll see that field in the first place.  Each moment spent prostrate in an inflatable swan is another minute he’s losing ground to Hoyer.
** 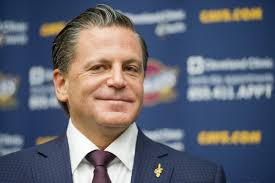 With the NBA draft just over a week away, it remains fascinating, in a dysfunctional Cleveland Browns sort of way, that the Cavs still don’t have a head coach.  For the moment they seem to be following the rubric of the Browns, meaning they are interviewing anyone with a pulse in order to hire someone who wasn’t on anyone’s radar.  Or else they’ll hire a retread.  Dan Gilbert, the Cavs’ owner, has more than sufficiently demonstrated a mercurial almost random streak when it comes to presiding over his investment.


At this point there seems to be no use in hiring a coach before the draft.  Depending on who general manager David Griffin drafts, the potential pool of coaching candidates could greatly increase or shrink precipitously.
There are probably two absolute head shaking aspects to what’s happening to the Cavs.  First, Griffin seemed to be at best a reluctant choice by Gilbert to remain as general manager once Chris Grant was fired.  From that tenuous platform Griffin has parlayed himself into temporarily the most powerful man in the franchise.  With no coach from which to gain input on the draft, the Cavs’ future literally rests on his shoulders.  That’s fine as far as it goes, it’s just that you’d like to think the future would have been entrusted to someone in whom Gilbert had unconditional faith.

Second, if the current model for sustained NBA success is the San Antonio Spurs, the Cavs’ approach couldn’t be more diametrically opposed to it.  The turnover in the front office and coaching staff is the most obvious example but truthfully everything else does flow from that, just as it has with the Browns.


The NBA remains the most difficult sport in which to turn a franchise around.  You need a nucleus as both the Spurs and the Heat demonstrated.  But the difference really is the other 8 or 9 players that fill out the roster.  The Heat lost to the Spurs definitively because most of the roster after the big 3 has simply been cobbled together based mostly on salary and luxury cap considerations.  The Spurs have always been the most methodical team in the league, making sure that every spot had a defined role with a player specifically chosen for that role.
The Cavs right now have a shaky nucleus at best and an almost embarrassing array of players who fit together as precisely as the pieces of 10 separate jigsaw puzzles would if you put them all in one box and shook it.


Never has a franchise been given such gifts by the NBA gods these last several years and while it would be difficult to say that those gifts have been squandered completely it isn’t difficult to say that they’ve been misused.  A team with a more stable ownership and front office would have had a more methodical approach to ensuring that all these gifts were complementary.  Of course if the Cavs had that kind of franchise then they wouldn’t be in this position in the first place. 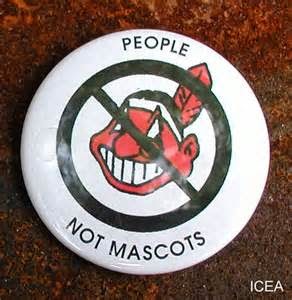 There’s an interesting legal battle brewing at the most mundane of places in the federal government—the U.S. Patent and Trademark Office.  In a move that seems to have caught, certainly, the Washington Redskins and, likely as certainly, NFL headquarters off guard, the Patent Office invalidated the Redskins’ various trademarks as having been improvidently granted in the first place because they perpetuate racism.


That decision will be held in abeyance while the Redskins appeal, but make no mistake that the death knell on the most racist name in sports continues to sound ever louder.
It is honestly difficult to construct a compelling argument to support Dan Snyder’s dogged insistence on keeping the Redskins’ name.  He’s left with arguing tradition and sounds just as silly as those who argue for abolishing gay marriage.


Times change as do one’s sensibilities.  The Redskins’ name has always been offensive.  What’s changed is the populace’s sensitivities to it and that’s not a bad thing.  Separate water fountains for whites and blacks were once commonplace and accepted aided by a U.S. Supreme Court ruling in 1896.  Times did change then as did sensibilities and this ultimately was reflected a little more than a half century later when the Supreme Court outlawed it in its seminal Brown v. Board of Education ruling.
The point is that tradition is a flimsy argument because the only real tradition the Redskins name is perpetuating is overt racism.  If/when the Patent and Trademark Office’s ruling is upheld in court, the Redskins will have no choice.  The issue becomes economic and there’s nothing that will change a buffoon like Snyder’s mine more quickly than the lost money from not being able to commercially exploit the name Redskins or, stated differently, watching others do that with no legal recourse.


The more difficult question that’s now getting attention has to do with the Cleveland Indians.  There’s nothing blatantly racist about the name or what that name symbolizes.  A challenge to the Patent and Trademark Office probably wouldn’t be successful if the intent was to rid the team of the trademark “Indians.”
The real issue is the trademark Chief Wahoo, a clownish almost disturbing caricature of an Indian.  The toothy grin, the bright red skin.  Like the name Redskins, the real truth is that American Indians always saw Chief Wahoo as a racist symbol, just as African-Americans saw the Little Black Sambo character as racist.  The only thing that’s changed is that people are starting to better understand what they mean.


To a certain extent the Indians have been de-emphasizing the Chief Wahoo symbol for the last several years and I’m certain that the Patent and Trademark Office’s ruling in the Redskins matter will accelerate this thinking.  If it didn’t, it should.  If the Indians end up in the Patent and Trademark Office with a similar challenge to a patently offensive symbol they’ll get a similar result.
It would be nice to think that the Indians owners would show some leadership and courage on the issue and declare immediately that the Chief Wahoo symbol is now in the past and won’t be used again to market the team.  We all should now call on them to do it.


I don’t think it will happen.  But I do believe the Dolans are more sympathetic to the issue than Dan Snyder is to his issue.  That means fans will see continue to see less and less of Chief Wahoo until the point where he’s disappeared altogether, not officially necessarily but effectively.  Once the team voluntarily takes any economic clout out of the symbol, its use becomes irrelevant.  The only real issue with this approach is that by not definitively eliminating it now, they leave open the possibility of future owners of the team taking a different approach.
Let’s avoid the circus.  Just do the right thing now and move on.  Chief Wahoo, it’s time to report to the front office and bring your playbook.