The Future Of the Indians... 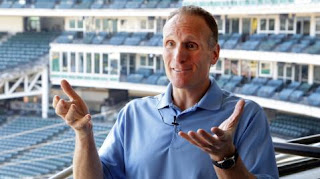 It’s pretty significant to the future of the Cleveland Indians that Mark Shapiro, who’s been with the team longer than the Dolans have owned it, is packing his kit bag for the move north to Toronto and a similar role with the Blue Jays.  What is probably far more significant to that future of the team is the lesser told story that the Dolans are looking to sell about 30% of the franchise, at an inflated valuation of course, in order to fund the team at more appropriate levels.


According to a story in Monday’s Akron Beacon Journal, the Dolans have hired an investment advisor to market the team to moneyed owner wannabees looking to get into the game.  Now under normal circumstances a smart person might ask why anyone would want to give a quarter of a billion dollars to the Dolans without any meaningful chance to control the franchise’s fate.  But those kind of smart questions don’t really apply in the world of professional sports. Really smart investors generally stay out of sports so the usual math tends to be meaningless.


What the Dolans are looking for is a lifeline, someone to fund the team’s salary growth.  In return they’ll give up a seat in the owner’s box and a seat at the table at the winter meetings.  Implicit though is the motivating factor of that minority owner.  He or she, but likely he, will become a member of the owners’ club and thus be seen as a potentially viable buyer of a majority interest in a franchise down the road.


It’s a construct that tends to work, by the way Jimmy Haslam never becomes the owner of the Browns if he hadn’t started off owning a small piece of the Pittsburgh Steelers first.  It gave the rest of the owners a chance to get used to his glad handing ways.  Steve Biscotti followed a similar path in Baltimore though he struck a particularly favorable deal against a craven, bankrupt owner in Art Modell and essentially stole the franchise out from under the Modell family. And a grateful generation of Clevelanders thank him.


In the near term this is a bit of good news for Indians fans, assuming that the Dolans find the well-financed patsy that their plan requires.  It also demonstrates what I’ve said for years.  The Dolans simply do not have enough money to compete with most other owners in major league baseball.  The franchise doesn’t generate enough money and the Dolans don’t have the wherewithal to deficit spend the team back into the level of competitiveness that would significantly increase revenues.


This is where the story of Shapiro becomes most relevant.  For years Shapiro has guided the direction of this franchise and has had to do it somewhat under unfavorable battle conditions.  Always trying to scrape together enough money to make targeted investments without huge downsides has led the Indians to essentially buy out the arbitration years of its best prospects while setting the stage for those prospects to leave once free agency beckoned.  The history with CC Sabathia and Cliff Lee would be played out once again with the likes of Corey Kluber, Michael Brantley and Jason Kipnis eventually.  It was always just a matter of time and may still be.


This is what Indians fans have been conditioned to expect and has been a factor, the degree of which one can debate, in the continued muted interest in this team, assuming one judges interest by such pedestrian metrics as attendance.


Shapiro has done his best to divert what’s happening with this left hand by keeping the right hand in constant motion.  The Indians, under Shapiro, have upgraded Progressive Field (mostly with Progressive Insurance’s stadium rights money) and have attempted nearly all manner of low cost distraction in the form of constant, and branded, giveaways.  Shapiro has been a whiz at using other people’s money (other than the Dolans, I mean) to cultivate an inviting fan experience even if the games tend to be boring and the team often on, at best, the fringes of competitiveness.


It hasn’t worked.  The Indians consistently rank near the bottom in major league attendance and there’s only so much for which one can continue to blame “the economy” before you come to the conclusion that winning matters and winning consistently matters even more.


Presumably Shapiro is well respected in baseball circles.  He’s the quintessential company man.  No one speaks more lingo and knows more metrics.  He’s personable without being obnoxious.  He’s probably a really pleasant guy around the office and maybe even fun in the few unguarded moments when he has a chance to kick back with a beer.  He’s had enough of success to make him seem competent without being so competent as to be out of reach.  In short, the Toronto job couldn’t have been the first opportunity to have come his way in 23 years with Cleveland.


Maybe it’s as simple as Shapiro being the eternal optimist.  Maybe he always figured that at some point the purse strings would loosen and he’d have to stop soliciting virtually every business near and far to partner up on this promotion or that.  At some point, though, life has a way of turning the most idealistic among us into hard-bitten realists and if there is one reality that’s well known under this Indians’ ownership it’s that this team was never going to be funded at a level that would truly allow it to compete on a regular basis.


Shapiro’s timing is a little curious though given how the Dolans are shopping the team.  That seemingly represents the best chance to really infuse this team with money and would seem like the opportune time for Shapiro to stick around.  That’s what actually scares me most.  If Shapiro doesn’t see that as the best chance to right the team than what hope should the fans continue to cling to?


In some ways, Shapiro will be missed and in many ways he won’t.  Under his watch he did bring the franchise forward using analytics.  What will never be fully known are the decisions he was forced to make that ultimately put this franchise in a state of suspended animation.


Paul Dolan is taking over the reins as president, content to take on the role himself rather than look outside.  There’s nothing in that sentence or those fact that suggests, in and of itself, that fans can expect anything different.  That will occur, if ever, when the Dolans find that quarter billion they want for a third of their franchise.
Posted by Gary Benz at 7:45 PM 1 comment: Links to this post