What Sky? What Falling? 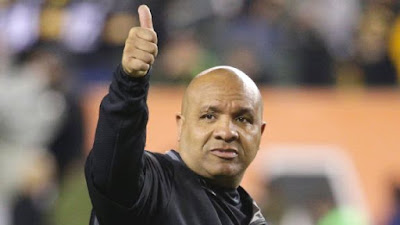 If Cleveland Browns head coach Hue Jackson doesn’t think that the sky is falling in after Friday night’s preseason debacle against the Tampa Bay Bucaneers it’s only because he knows the sky fell in long before he got here.  Indeed, if you’re a big picture person you could say the sky collapsed the very first game of the Browns 2.0 reboot, a 43-0 loss to Pittsburgh, and the ensuing 17 years have been about trying to find a way to prop it back up.

Don’t look for Jackson and the latest excavation crew he’s leading to add many support beams this season.  Either the Browns are the least talented team I’ve ever seen or the least prepared.  It doesn’t matter, really, just as it doesn’t matter if it’s really a combination of both.  This is a team that went 3-13 in 1999, went 3-13 last season, and will struggle to get to that record this season.  This version of the Browns, as woeful as any in franchise history, will not be favored in any game this season, of course.  But perusing their schedule I can’t find a game where they’re likely to be less than a 7-point underdog.  I’m sure that’s happened in the NFL at some other point, probably this same franchise in 1999.

What’s most intriguing though is that despite this franchise consistently offering its fans zero reasons to remain invested in their fortunes, interest is far higher in the Browns right now that the Indians who enter the last month of the season with a 4 ½ game lead in their division.  Not that local sports talk radio is any sort of accurate barometer, but Browns fans and questions seem to run at least 2-1 vs. Indians fans and questions.  Attendance on the other hand is a more accurate barometer and the Browns outdrew the Indians and it had nothing to do with the larger capacity at FirstEnergy Stadium.
But this isn’t a screed about misplaced fan priorities.  It’s not even a screed of any sort.  It’s just the resignation that once again the fans with all their misplaced priorities are going to be misused, abused and told that despite what their eyes can see this is a team with a future.

At some point this might actually be a team with a future.  But that future can’t ever arrive if the team doesn’t ever draft one.  This preseason has been about purging the team of the previous regime’s awful draft choices, creating openings for this regime’s shaky draft choices.  And while it is well too early to judge whether Corey Coleman or any of the 13 others drafted will be able to meaningfully contribute not just this season but ever, the trend is clear making the chances slim.

But because almost every draft pick from a previous regime has been sent packing, along with most of their free agent signings, this is a team that lacks not just depth but any semblance of depth.  After Joe Haden and Joe Thomas and Josh Gordon if or when he actually can suit up in a regular season game, you’d be hard pressed to find a player on this team who would start on any other team in the league.  What that says about how this team’s been run is plenty, but the larger point for now is that the overwhelming majority of this team’s starters would be back ups elsewhere.  Backing up the Browns’ starters, then, are players that might not even be in the league.

Without any depth anywhere, the team is doomed before it takes the field.  Injuries will take their toll, as they do on every team.  The next person up for the Browns is most likely a person who’d be scrounging for work in the Arena League.

Jackson is a good coach and thus far his attitude is appropriate.  He knows exactly what a shit storm he walked into and seems realistic enough to lower the expectations of not just the fans but the players remaining.  In some sense this entire season will play out like an extended preseason schedule.  Players will rotate in and out.  Combinations will be tried.  Some things will work, most won’t.  But when the season’s done if there has been measurable growth, if more than a handful of this year’s draft choices remain and are contributing, then from Jackson’s standpoint he’ll likely label the season a success even if there aren’t any wins to celebrate.

The problem from the fans’ standpoint, at least those willing to buy tickets, is that they’re being asked to invest full price to witness the continuing sins of bad ownership and lousy front offices.  From their perspective they, too, may see some measurable growth but what will remain abundantly clear is that even at that trajectory the Browns remain several years away from being truly competitive, and that’s assuming that this regime, top to bottom, bucks history and stays intact for more than a season or two.  Who wants to take that bet at even odds?

Jackson said after Friday’s game that he wasn’t overwhelmed by the task in front of him even after witnessing his untalented and ill prepared team fail in every possible way.  Who knows whether he’s even being truthful with himself.  What we do know is that the enormity of the task has swallowed up every owner, general manager and head coach who’s come before him in the last 16 years.  What will really be worth watching then is Jackson’s body language as the season wears on and especially after the inevitable beat down at the hands of the Steelers in game 16.  If Jackson can keep that spring in his step, then he will be a coach worth watching, at least until the front office fails him in next year’s draft.

So what we’re all really left with once again is a team that will not just be hard to watch, but almost impossible, particularly in the second half of most early games and both halves of the latter part of the season.  We’re also left once again scraping for any hope or even glimmer of hope, a long TD pass from Robert Griffin III to Corey Coleman, a breakout season for Terrelle Pryor, another Joe Thomas Pro Bowl, so that at some point all this time, money and passion will be rewarded.  That’s not the best way to start off the Monday leading into the last preseason game, but it’s really all Browns fans have, again.