Running Out of Paths Forward 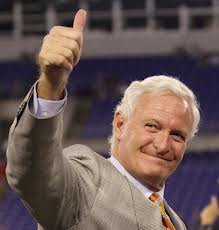 There are many ways to measure the depths to which the Cleveland Browns’ franchise has sunk as of December, 2017. You could count quarterbacks or head coaches, offensive coordinators or general managers.  You could even count owners.  Mostly though it’s just been the losses.  Losses and more losses and then more after that.  It used to be that this team could be counted on to win 3 games a year.  Now it can’t even win three games in two years.


Too many to count at this point have had a hand in creating the single worst franchise in all of professional sports.  Yet the alarming, almost inconceivable consistency in making the exact wrong decision every single fucking time is perhaps the best way to capture not just the ineptness that is the Browns but the serial incompetence that permeates each and every pore on each and every coach, player and front office worker, that has seeped into the brick and marble, wood and stone that hold together the Berea complex.


You’d think that simply going full tilt George Costanza and doing the opposite of what their instincts otherwise tell them is the right thing to do would be enough to at least make this franchise competitive.  But at its core those in charge, from owner Jimmy Haslam on down, lack even a modicum of Costanza’s fleeting self-awareness.  Not to be too impolite here, but they are just too stupid to recognize all that they don’t know.


That’s why it should concern the few remaining chuckleheads with an interest in this team’s success that newly hired general manager John Dorsey shut down any talk about head coach Hue Jackson being fired at season’s end.  Let me give you two data points.


In 2006, in this very same space, I wrote that Romeo Crennel, then head coach, had to be fired.  It was clear that Crennel had lost the team and that its trajectory was headed, again, in the wrong direction.  You don’t need to look it up.  Crennel won 6 games in 2005 and 4 in 2006.  He held on to his job anyway.  The next year he took the Browns to their Browns 2.0 high water mark by winning 10 games, a record grossly inflated by weird scheduling quirks that gave the team the easiest schedule in the NFL that season.  Still it was a real glimmer of hope even if the Browns didn’t make the playoffs that year.  But the flaws in the team were apparent when a 10-win season gave them a tougher schedule the following year.  Crennel and the Browns sunk back to 4 wins and he was fired for all the reasons that still existed two years later: he couldn’t control the team, he was disorganized.  In short he proved out exactly why after having such success as a defensive coordinator no team but Cleveland was willing to make him a head coach.


Fast forward, but just a little bit.  After Crennel was fired, then owner Randy Lerner jumped at the chance to hire Eric Mangini about 5 minutes after Mangini had been fired by the New York Jets.  Mangini flamed out in New York for much the same reason he can’t get another head coaching job today.  He’s arrogant to a fault without a scintilla of accomplishment to justify it.  Mangini came in and alienated players and fans before he even had a chance to rent a place to live. He was allowed to essentially hire his own boss as the general manager and then summarily fired him and acted as his own general manager instead.  A wave of poor personnel decisions inevitably followed.  His first season was a disaster and not just because he won only 5 games.  He was a dick to the players and the media which only served to create further separation between a struggling team and its way-to-loyal fan base.


Late in the season even Lerner could see that the wheels had fallen off and decided that this team needed a real “football” mind.  He brought in Mike Holmgren, not as the head coach, but as the team’s effective CEO.  Holmgren was a good concept poorly executed.  He had a chance to observe Mangini’s pettiness in action and while nearly everyone thought Holmgren would fire Mangini and replace him, Holmgren, in a fit of empathy as a former coach himself, decided Mangini should have another year to prove himself, never mind the smoldering embers of a franchise that already had been lit on fire once again.


All that did was delay, again, putting this franchise on better footing.


One of the lessons of these two episodes is that holding on to the wrong coach in the pursuit of continuity is as much a fool’s errand as turning over a team’s personnel department to a group that had never made a football decision in its life.  Stability, continuity, consistency, whatever you want to call it, is a laudable goal.  But it shouldn’t serve to obscure the fact that if things aren’t right they’re wrong.


The question now, of course, is whether Jackson should retain his job.  Those arguing for him point out the obvious: this team has the worst collection of players ever to grace any NFL roster ever.  Those calling for his firing point out the obvious:  Jackson has the worst record of any head coach ever.  It’s the most Cleveland of dilemmas, complicated, of course, by Haslam bringing on a general manager and yet giving him no authority to find a coach that can win a game.


Maybe Haslam is just tired of paying coaches no longer on the payroll.  Maybe Haslam is just being Haslam, meaning telling someone what he wants to hear in the moment.  But the most likely explanation is that Haslam meant it when he said it.  Which, as it usually does with Haslman, means that it may not be true the next moment.  He’s as impetuous as anything and everything associated with the Browns.  It would be useful if that could be counted on just one more time.


Jackson should be fired.  There’s no way to know definitively but I doubt that any other coach currently in the NFL would have ended up with only one win in two years.  The roster is as bad as it looks each week.  Outside of Joe Thomas there isn’t another player on this team who would be a sure starter on any other team in the league.  But not every loss has simply been an issue of talent. Jackson is overmatched. He’s not a good enough head coach even if he was just concentrating on being a head coach.  Acting as his own offensive coordinator has been a colossal failure but more to the point is that Jackson lacks the self-assessment skills to realize it.


You could literally cite any game in Jackson’s tenure to make the point but just look at Sunday’s loss to Baltimore.  Crowell had 1 carry in the first quarter that went for 59 yards.  He had 6 more carries the rest of the game.  Jackson may be calling plays but it can hardly be said that he’s coordinating the offense.  There is no theme, there is no approach.  It’s almost as if he doesn’t watch game film on the upcoming opponent to create a plan of attack.


There’s probably a more practical reason, however, that Jackson will get fired: attendance.  Losing so much for so long has deteriorated the base of this franchise.  There was a point where it looked as if nothing would keep Browns fans from the ‘80s from filling the Stadium no matter how bad the product got.  That’s not true.  Indeed what is true is that attendance has continued to deteriorate and the clip, just since Haslam arrived, has accelerated.


During Haslam’s tenure, this team has lost around 59,000 fans year over year.  To put that in perspective, the attendance at Sunday’s game against Baltimore, the last home game of the season, was a little over 57,000.  In other words, Haslam is losing the equivalent of another home game’s worth of attendance.  That’s not just money out of his pocket.  It’s costing other NFL owners as well.  Haslam must account for that to his brethren. Always a short term thinker anyway, expect Haslam to choose the quickest path in front of him and fire the coach.  It will create a year’s worth of enthusiasm if nothing else.
Fundamentally, though, the issues are more systemic.  Jackson’s firing will probably feel like a pardon to him and the fans who have no one else to complain about on a regular basis.  Jackson will survive in the league as an assistant somewhere and the Browns will once again find another coach, another system and another start.  But the fixes that need to get made are longer term in nature and start with Haslam.  He’s a terrible decision maker, at least when it comes to football, and he needs to embrace his own level of incompetence.  If he truly believes that John Dorsey is the right football person to run the team then, dammit, let him run the team.  Change the org chart.  Let him hire a legitimate head coach.  Make everyone report to Dorsey and Dorsey to Haslam. Then Haslam should sell the house in Bratenhal and commute every Sunday from Tennessee.  It really is the only hope.
Posted by Gary Benz at 5:30 PM 1 comment: Links to this post