Shades of Scarlet and Gray 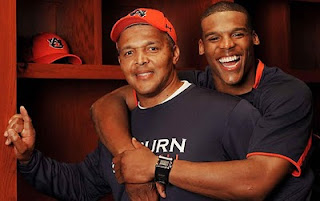 Maybe the Ohio State Buckeyes players suspended Wednesday by the NCAA just should have had their fathers negotiate the memorabilia sale. That's the lesson I think the NCAA was trying to send when it suspended quarterback Terrelle Pryor and four of his teammates on Friday for selling their own personal items to a shady Columbus tattoo parlor owner, as if there were any other kind of tattoo parlor owner.

Assuming that Pryor and his suspended teammates return for their senior season, the Buckeyes will have to muddle through the first four or five games without them as they ponder their sins if they can just figure out exactly what they were.

See, the NCAA, with a rulebook as thick as the skulls of the people that enforce it, had to figure out for themselves why it is that student-athletes can't sell items that are rightfully theirs for whatever the market price might be. They eventually landed on something and now the players will be carrying a scarlet and gray A on their records for the rest of their lives.

The danger of pointing out the ludicrous nature of what just took place at Ohio State is that you'll be labeled a Buckeye apologist. But the alternative is to assume that the rules in this case are black and white, which they aren't, and that nothing about this situation yields even the slightest shade of gray. In truth, that's all there is here, every shade of gray imaginable.

Let's put this into context, shall we? Pryor and Company didn't break any laws, at least the kinds of laws that you and I adhere to each and every day as we muddle through life. What they did was violate a NCAA rule that when bent to read whatever you want it to read says that items you were given for your accomplishments on the field aren't really yours until you leave college. Thus if you try to do with them what millions of others do with similar items via EBay each and every day, your eligibility will be in jeopardy.

What I'm still having difficulty understanding, and I'm a lawyer, is exactly what Pryor and company did wrong. Personally it bothers me that the group placed such low value on awards they received like Big 10 championship rings and gold pants awarded for beating Michigan each season that they had no qualms about selling them. (OK, I understand the gold pants because, frankly, how many do you really need?) But that's a moral issue of sorts, not legal.

Surely if a player has a 1998 Ford Escort or a bike he wants to sell, the NCAA would not have a problem or perhaps a far lesser problem anyway. But because these were awards each earned on the field, suddenly it's a problem, a really big problem, the kind of problem that requires really, really harsh punishment.

It's a fine line and one that doesn't exactly make sense. One guess is that the NCAA is most concerned about the uniqueness of the items (except, of course, the gold pants for beating Michigan which, after the last 10 years, are as plentiful as grains of sand on a Florida beach) because they garner a higher price from the shady sorts trafficking in memorabilia that makes the NCAA nervous. But if that's the issue then it's easy enough to say when awarding the items that it is against the NCAA rules to resell them while still in college, except that there is no NCAA rule on the book that actually says just that.

Which is why even if you understand the policy implications at work the action that took place here still doesn't make sense.

That a generic NCAA rule would be interpreted thusly came as a bit of a surprise to everyone involved, including, by the way, the NCAA. It admitted in doling out this particularly harsh punishment that its education on this rule at exactly the time it was supposedly violated was less than stellar. Then it went ahead and whacked the players a tad harder because they didn't report their misconduct, which they didn't know was misconduct, sooner. This circular logic makes sense only in the context of the NCAA giving themselves enough wiggle room down the road to negotiate down the punishment a bit as a concession to the fact that their decision is questionable in the first place.

This is what aggravates most. Newton escaped any punishment whatsoever even though the NCAA had verifiable proof that the person closest to him, his father, was trying to sell him to the highest bidder. In the NCAA's view, it wouldn't be fair to punish Newton because he could smile and say. “gee, I didn't know my dad was doing that. He just told me where to go to school and I showed up.”

Pryor, Posey, Herron and Admas will get no such leeway. They knew they sold their stuff and they knew they made a little money off of it when doing so. They just didn't know it was a violation of any rules. Why would they?

The scuttlebutt is that the players, or at least some of them, sold the items to help out their families. It's a nice little twist to the story that makes their decisions a little more understandable (assuming it's true), but even if they kept the money for themselves I still struggle to understand the problem.

As scholarship athletes they get their education free. I've paid plenty of tuition to plenty of colleges so I understand the value of what the athletes are given in exchange for performing on the field like trained seals. It's not insubstantial. But they don't get a cash stipend as athletes and they don't dare work part time anywhere because of all the problems that can cause with the NCAA. Not all of them come from even middle class backgrounds and thus don't have parents with enough means to front them the spending money that nearly every other non-athlete has as they go about their college lives.

As a lawyer, I understand intimately that ignorance of the law is never an excuse. Imagine if it were? But this isn't the law, it's a freewheelin' NCAA rulebook whose application changes seemingly every other minute. And if you don't believe that then just consider how the NCAA dug out an even more arcane provision of that rulebook to make sure the 5 players weren't suspended for the Sugar Bowl.

Basically, the enforcement folks felt that punishing the players for the Sugar Bowl would have been to the extreme detriment to the Bowl itself and all the fans from both teams that plunked down cash to attend. In other words, the NCAA wanted to appear magnanimous in not punishing the innocent for the sins of a few.

It's a nice thought, certainly, but how about all the innocent players the the NCAA has punished over the years because their ex-coach ran afoul of NCAA rules? Is it fair that 80 or so players at USC for example must suffer the consequences of the real sins of Reggie Bush (a player who knew he was violating about the only black letter rule the NCAA has) and the athletic director and coaching staff that facilitated those sins? Aren't they innocent victims suffering far worse and for a far longer period of time than anyone who may have plunked down their dollars to see a meaningless Sugar Bowl game just because they thought Terrelle Pryor would be playing?

What this all demonstrates, really, is that the NCAA enforcement process has grown beyond the ability of the current regime to handle it. The issues are more complex than a rulebook written in the 1950s can now handle and every time they try to apply outdated rules to modern situations they end up with answers that undoubtedly are going to leave everyone scratching their heads.

Now of course the Buckeye haters out there are relishing the suspensions because, well, they are Buckeye haters. Nothing breeds contempt like success. But the real cautionary note in all of this is that the inconsistent hand of the NCAA will come down anywhere at any time. So before you start feeling righteous about your team and looking down your nose at another's misfortune, just know that sooner or later that random hand will come down on your team as well. It always does.
Posted by Gary Benz at 8:01 AM