An Exercise in Tedium 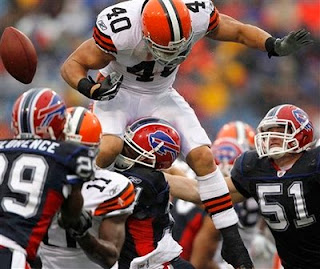 Well, there will be no end-of-the-year 4-game winning streak this year.

The Cleveland Browns, who seemed to overwhelm the competition last year with a rediscovered late season running game that literally saved head coach Eric Mangini's job found themselves a victim of their own medicine as the Buffalo Bills rushed for nearly 200 yards en route to a 13-6 win. The loss dropped the Browns to 5-8 and assuring another season without a winning record.

A thing of beauty this game was not. It was nearly exactly what you might expect from two teams playing in December with a combined 7 wins between them. It was mistake filled and mostly served to highlight two franchises that are still firmly gripping the bottom rungs of the league's ladder.

There would be no sudden end or last second collapse. There would be no ball grazing a goal post to tip the fates one way or the other. Instead it was mostly a painful journey through all the reasons these two teams are what they are. Though the game was played in a steady rain, it really didn't seem like it was the overriding factor in the game.

A far bigger factor was the Browns' inept approach and even more inept execution. In the game they had 5 fumbles, 3 of which were by Hillis. They lost two of them. They also had the 1 interception that allowed the Bills to close out the game. For good measure, they never even crossed midfield in the second half. The Bills were slightly better, fumbling twice and losing it once. They also had their share of goofy mistakes, starting with being offside on the opening kickoff.

Still, credit should be given to the Bills since they found a way to win. And when the Bills get into their film room come Monday, they will enjoy in particular how they finished the game. Let's preview that film session for them.

After a predictable Jake Delhomme interception late in the fourth quarter, the Bills pounded the ball nearly at will at the heart of the Browns defense to run out the clock, ending the game at the Browns' 7-yard line. It was a little mercy shown and a little exclamation point for a team that going into the game had but 2 wins all season.

If Delhomme was using Sunday as a chance to make his case to remain the starting quarterback for the team's final 3 games, he wasn't persuasive. Skittish for the second consecutive week, Delhomme rarely looked down field to pass and in the process made the Browns offense even more predictable then the outcome of “It's a Wonderful Life.”

Even a team with the worst rushing defense in the league, which the Bills have, will eventually be able to stop the run when they know nothing else scary is coming their way. Just put 8 or so players up close to the line of scrimmage, which the Bills mostly did. Although Peyton Hillis had 108 yards rushing, there was virtually no passing game to support him as Delhomme was just 12-20 for 86 yards and 1 interception.

The fact that the Browns would try to run the ball was hardly a state secret anyway. And it certainly seemed like the Browns might be in for a good day based on the ease of their first drive. It featured 8 straight runs that covered 54 yards, nearly all of which were by Hillis. It allowed Hillis to quickly get the yards he needed to go over 1,000 for the season, making him the 9th running back in franchise history to achieve that milestone.

The problem was that the Browns needed to cover 55 yards in that drive to get into the end zone. But for reasons as mysterious as they were mystical, the Bills' run defense tightened up once the Browns were 1st and goal from the 5-yard line and as a result the Browns settled for a 19-yard Phil Dawson field goal for the quick 3-0 lead. On the plus side it kept a nice streak in tact as the Browns have now had a lead in every game this season. On the down side, it was the only real highlight of the game for the Browns.

For a moment, though, the Browns looked to be right back in business after the Dawsn field goal when linebacker Chris Gocong forced a Ryan Fitzpatrick fumble and it was recovered by Eric Wright, who took it back to the Buffalo 25-yard line. But Hillis returned the favor on the next play as he tried to leap over a defender and lost the ball to nose tackle Kyle Williams. The Bills put together a nice drive in response but weren't able to turn the fumble into points when they came up short on 4th down at the Cleveland 35 yard line.

It didn't matter. The Bills were able to get on the board and get the lead on their next possession thanks to 11-yard touchdown pass from Fitzpatrick to David Nelson. It was the conclusion of a 14-play 89-yard drive that bled the Browns' defense one paper cut at a time. It also was the only touchdown of the game.

The Browns' only other score of the day was on their next possession when they marched right back on the Bills but then had to again settle for a short Dawson field goal. What was most notable about the drive, however, was that it featured Delhomme's only down field pass of the entire game, a 34-yard hook up with receiver Mohamed Massaquoi. But Delhomme, despite all the time anyone would have needed, couldn't find an open receiver on 3rd down from the Buffalo 8 yard line forcing the team to settle for the field goal.

Looking to trade field goals for touchdowns, the Bills turned right around and marched through the Browns' defense just before the half. But there's a reason they are who they are as well. With the ball sitting at the Cleveland 5-yard line and 36 seconds remaining, the Bills came out of time out and preceded to get a delay of game penalty, which is the kind of things teams with two wins tend to do. That pushed the ball back to the 10-yard line. Fitzpatrick was then sacked and missed on a 3rd down pass, setting up a Ryan Lindell 30-yard field goal. It gave the Bills a 10-6 lead at the half.

The second half was simply an exercise in tedium. Still, there was some fun to be had if your sense of humor runs to the absurd.

If it does, then you'd have a hard time finding anything more absurd than the Browns' drive that started late in the third quarter and carried over into the fourth. It began at their 9 yard line, lasted over 5 minutes, featured 10 plays and covered a grand total of 24 yards before Reggie Hodges punted. There were 3 fumbles, two by Hillis and one by Cribbs. The Cribbs' fumble really told the story of the drive, indeed the day.

The play started when Hillis and Delhomme ran into each other while attempting a fake hand off. It fooled no one. By the time Cribbs came around from the right end, he was greeted by a host of Bills players who had more or less set up camp about 10 yards behind the line of scrimmage as they waited for this excruciatingly long play to develop. Cribbs was stripped of the ball as he attempted to avoid the inevitable loss of yardage and appeared to have lost the ball completely but somehow emerged with it when the play was all over. It allowed the drive, such as it was, to continue but only for a moment more.

The fun continued on their next possession when Delhomme fumbled deep in Browns' territory while attempting to pass. When the ball came loose, Bills defensive back Bryan Scott recovered and was heading into the end zone untouched. But the back judge, who likewise was having a rough day, whistled the play dead quickly thinking that it was an incomplete pass. Bills head coach Chan Gailey challenged the call and it was overturned, giving the Bills the ball at the Cleveland 23-yard line. It could have been a critical mistake by the official because the Bills were not able to punch it in the end zone, despite getting it down to the Browns' 1 yard line. They had to settle for a 19-yard Lindell field goal and a 13-6 lead that theoretically kept the Browns within a touchdown with 7 minutes remaining in the game.

It was just theoretical. Delhomme piled on still more misery on the Browns' next drive when he literally threw a ball up for grabs on 3rd and 8 from the Browns' 49-yard line. Of course it was intercepted by Bills cornerback Leodis McKelvin who returned it back to the Buffalo 42-yard line. From there running back Freddie Jackson took over and iced the game for the Bills.

As far as performances go, it was probably the Browns' worst of the season given the level of competition and the decided advantage they seemed to have going into the game. They didn't just play down to their level of competition. They played below it. There was no cohesion on offense and as they have done too many times this season, the Browns' defense couldn't get the stops they needed when they needed them most, meaning late in the game, although that hardly mattered ultimately.

As Mangini crossed the field at the end of the game to shake Gailey's hand, you could see the anger streaming from every pore. He knows that if nothing else, this kind of performance isn't going to quiet those that already are convinced that he needed to essentially win out once again to save his job. I'm not so sure about that but there's no question that Mangini won't be using this game as his primary argument when he discusses his fate with Mike Holmgren come season's end.

From here, the last breather on the Browns' schedule is next week against the woeful Cincinnati Bengals. Of course, that was a description that until today applied to the Buffalo Bills as well and we know how that has since turned out. And perhaps even more depressing is that given the extremely limited interest in a game where, once again, the teams combined have 7 wins, we'll likely be subjected to once again the crack broadcast team of Don Criqui and Steve Beurlein. Talk about your lumps of coal.
Posted by Gary Benz at 4:55 PM