Saving His Own Skin 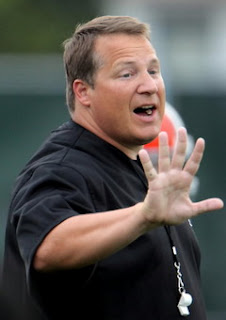 There’s nothing like a bad loss to renew a coaching debate.

When the Cleveland Browns scurried out of Buffalo on Sunday with their collective tails between their legs, the message boarders and media speculators wasted little time pinning Mangini’s fate on the outcome of the team’s final three games.

In some ways, that makes sense. The last three games, coming as they do against Cincinnati, Pittsburgh and Baltimore, provide a good late season measuring stick. The Bengals are like the Browns at the moment, the season more or less over before it began in earnest. Pride, jobs next year and their head coach’s fate is all that remains to play for. Call it the “Mail In Bowl.” Pittsburgh and Baltimore need to keep winning. It will be a testament to or an indictment of Mangini depending on how the team responds.

In other words, it’s exactly the kind of final exam any head coach should have to take if his job is seriously in jeopardy. The problem, though, is that I don’t think that Mangini’s job really is in that much jeopardy unless team president Mike Holmgren wants to return to coaching and wants that to be in Cleveland. In that case, Mangini already is gone.

But I don’t think Holmgren really does want to return to coaching anyway. Whatever time he has left between now and actual retirement is far better spent in the front office and as each day passes I get the sense he realizes that.

There are plenty of statistics around to make whatever case you want about any topic you want, especially sports. Mangini doesn’t even need a Harvard Business School grad to crunch the numbers in this instance to make a somewhat compelling case for himself. There are enough good stats floating around the surface to make the case that this team is appreciably better than it was a year ago, assuming that is one of the key standards by which Mangini is being measured.

Mangini’s argument really can start with the last four games of last season and carry through to Sunday’s game against Buffalo. In that time his team is 9-8 and played an objectively difficult schedule to get there. In that stretch, the Browns have led in every game they’ve played. The defense has only given up more than 30 points once, last season to Kansas City in Week 15. They’ve also scored 17 more points than the opposition in their last 17 games. To contrast the difference, consider that for all of last year, including those last four games, the Browns were outscored by an average of 13 points per game.

If Mangini needs to dig deeper he can always point to the players on the roster. It’s filled with more holes than the plot to Inception. Indeed, to take the talent presented and still find a way to eke out a positive record over its last 17 games qualifies as a minor miracle on the level of Cleveland side streets getting timely plowed and the pot holes getting timely filled. 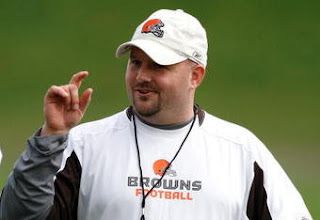 But before Mangini goes and gets all secure, hopefully he recognizes that there is a case to be made that the current trends aren’t looking nearly as positive. The defense is still collapsing at exactly the moment it needs to rise up and that was evident on Buffalo’s last drive Sunday. The real problem though is on offense.

So when Holmgren makes his evaluation of Mangini, another key will be to determine how open Mangini will be to changes on offense. Don’t ponder that question too long. In the world of pro football where the supply of head coaches always exceeds the demand, it’s pretty easy to see on which side of the bread it is buttered, meaning that Mangini will be open to pretty much anything Holmgren might suggest.

To survive in this business, particularly when your resume to this point is a little thin on accomplishment, a head coach like Mangini can’t afford to take too much of a philosophical stand on anything that isn’t completely aligned with his boss. And what we know right now from the few words Holmgren has said on the subject, the team’s offensive scheme is at least as confusing to Holmgren as it is to the rest of us.

Thus, don’t be surprised if, following his discussion with Holmgren, Mangini hangs onto his job and then brings offensive coordinator Brian Daboll in, thanks him for his hard work, writes him a nice letter of recommendation and then sends him back to the available assistant coaches pile where he’ll be lucky to find a job in the near term as a quarterback’s coach. Mangini will then go about finding an offensive coordinator more versed in Holmgren’s “west coast” offense and then thank God or the Fonz or whatever deity he prays to that it’s not him out looking for a job at the moment. .

All this occurs because it is becoming clearer as each week passes is that Holmgren’s view of the offense is well justified. Over the last several weeks, starting exactly at the point when the Browns’ unrelenting schedule relented, it seems as if Daboll has tried to take on teams head on, which seems particularly ill advised. This team has a strong runner in Peyton Hillis but they have no receivers to speak of and a skittish and weak-armed starting quarterback who seems too afraid to try and throw the ball down field. It isn’t a recipe for trying to take on any team mano-a-mano.

The Browns’ last 3 games more than prove the point. The game against Carolina featured a steady diet of Hillis and not much else and the Browns were lucky to emerge with a victory when a last second field goal attempt by John Kasay hit the upright. The Browns used the same formula against Miami and squeaked by again thanks to a dropped interception by Miami and a gift interception by Mike Adams. The same formula was carried into Buffalo, which featured the worst run defense in the league. It finally crapped out.

It’s understandable that the Browns’ attack would be so run-centric. But in the last several weeks it’s come at the expense of any of the creativity and unpredictability that the offensive attack featured earlier in the season. It’s almost as if Daboll and/or Mangini got it into their heads that this team was ready to compete offensively on an even basis with anyone and then went out to prove how wrong they were.

So much of the blame on Sunday’s game went to quarterback Jake Delhomme, but the problem isn’t with Delhomme but the coach or coaches that put him on the field in the first place. Delhomme’s a great guy, a true professional on a team that has had too few in recent years. But his skills have diminished appreciably and that’s apparent to anyone bothering to watch.

And yet unless McCoy can play on Sunday in Cincinnati, it will be Delhomme back behind center trying to out execute a Bengals’ defense that will not only know what is coming but when it will be coming as well.

There’s an argument that losing McCoy for these last three games has gotten the offense off track, but it’s an argument that doesn’t make sense. This offense was installed without even a fleeting consideration that McCoy would be leading it this year. His play has been exciting and makes the entire offense seem less turgid because he’s a threat to run, but fundamentally the offense is merely a set of plays and not a comprehensive scheme designed to take advantage of any mismatches. Daboll is a signal caller. He’s not a coordinator.

When Holmgren observed that he wasn’t quite sure what the offense is trying to do, he wasn’t alone. Even Mangini admitted in his press conference this week that he wasn’t sure the team had a well conceived game plan this past week. It was the clearest sign yet that the fractures are forming and that even Mangini is starting to realize that his continued employment may very well depend on Daboll’s unemployment.
Posted by Gary Benz at 8:13 PM

I think great analysts, like great artists, are born that way and you make it look effortless. HBO is showing a documentary on Vince Lombardi which I watched and thought was an insightful portrait into a man driven by his passions to pretty much the exclusion of everything else. While I've never been accused of being a pragmatic individual, I am quite reality based, and I understand that life is about priorities--and our passions matter. One could argue (and even hope) that there is a time and place for everything. Lombardi never got or sent that message and history is filled with accomplished people like him. Certainly we all struggle with balance. Did you see this documentary? You can bring it up on HBO at your liesure. Any thoughts?--I would be interested on your take. m.