The Numbing Sameness of It All, Again--Chud is Done Edition 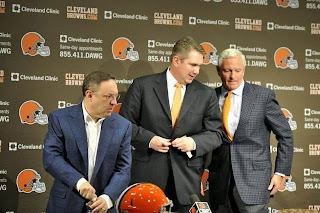 In a manner totally befitting the random, callous way that the Cleveland Browns operate, Rod Chudzinski was fired after one inglorious year.

They did it first by dropping the rumor in the media a few hours before the Browns were scheduled to suffer their annual year-end beat down at the hands of the Pittsburgh Steelers.  They then left Chudzinski dangling at game’s end by issuing a press release in which they deliberately refused to end the speculation.  They finished the job sometime after the game, informing Chudzinski Sunday night telling him, undoubtedly, that the organization was moving in a different direction.

The problem of course is that this organization never moves in a different direction.  If there is one thing that’s clear, it’s that the Browns are committed to the same losing path year after year.  Occasionally they change out the tour guide in the misguided hope that the previous one was the problem.  It hasn’t worked yet.
This organization has never been able to honestly look itself in the mirror and the firing of Chudzinski simply continues that disturbing pattern.

Chudzinski deserved better and had every reason to think that when he was hired, he would receive better.  So did the fans.

The suggestion that somehow Jimmy Haslam, the new owner of the Browns, was going to come in and do something different came with the implication that different meant better.  Given how low this franchise had sunk, it was almost unthinkable that different could mean worse.  And yet it’s exactly where things stand after still another miserable, lost season.

Given how many coaches have cycled through this franchise without the benefit of a decent front office that could identify and secure talent, Chudzinski’s fate doesn’t surprise.  Nor will it surprise in a year or two when still another coach is fired and another is hired.

This is the essence of the numbing sameness of the Browns.

When he was vying for the necessary votes to become a NFL owner, Haslam spent time cozying up with
NFL royalty like Bob Kraft to uncover the secrets of doing things right.  It was apparently just for show or he just didn’t listen.  His first hire, Joe Banner, brought with it the illusion of credibility when in truth Banner carries himself with all the personality and darkness of Dick Cheney, but with half the charm.

Banner then went ahead and brought in someone with even less credibility, Mike Lombardi, to make personnel decisions.  Lombardi has always been long on mouth and short on accomplishment.  At least he has some self-awareness.  Recognizing exactly how little he’s thought of around these parts, Lombardi stayed off the radar screen, confining his machinations behind the scenes. Just as incompetent, just not as visible.

Together Banner and Lombardi went through a process, less exhaustive apparently than advertised, to land on Chudzinski, a decent NFL lifer waiting to take the next step in his career.  Banner and Lombardi flirted with Bill O’Brien and Chip Kelly but got nowhere.  Kelly in particular seemed to string the Browns along until he could secure a better offer from a more stable franchise.  That led to Chudzinski’s hiring.
How exactly they went about making the decision to hire Chudzinski deserves some significant scrutiny in retrospect.  It’s hard to imagine why Lombardi and Banner agreed to hire him in the first place.  What did they think they saw then that turned out to be so incredibly wrong less than a year later?  Maybe more to the point, given how poorly they botched the last hire, why should anyone, including Haslam, trust them with that kind of decision again?

This isn’t at all a knock at Chudzinski.  Indeed it’s difficult to know exactly what he does or does not bring to the table given how poorly Lombardi performed his job this season.

All of these decisions and non-decisions led directly to the results on the field so naturally it makes sense that Chudzinski would lose his job.  It wouldn’t surprise if Banner and Lombardi get a raise in the process.
In the context of Lombardi and Banner, the decision to fire Chudzinski makes sense.  It’s the best way, really, to deflect from their own misdeeds, starting with the flimsy hiring process they undertook and culminating with the firing they engineered.

What is harder to understand is why Haslam is letting all this happen.  Even Barak Obama thinks Haslam is having a bad year.

Haslam vowed to be a full time owner and removed himself from the CEO position of his little family
enterprise, Pilot Flying J truck stops just to make that point.  He bought a house in Bratenahl.  He was going to be visible.  Hardly.  In what should now be considered foreshadowing, Haslam almost immediately pushed aside his new CEO and took back the reigns.  He’s less visible in Cleveland than LeBron James.  Let’s just say that loyalty isn’t his strong suit.

Then Haslam saw his business engulfed in a major legal scandal that started with a FBI raid and has thus far resulted in a number of convictions of former employees.  Haslam has denied any knowledge of the illegal skimming operation but unquestionably his mostly family owned company benefited from it.  Most of this season has been spent by Haslam paying back customers who were victimized by the skims, navigating dozens of lawsuits, and doing what he can to make sure he doesn’t end up in front of a criminal court himself.

All in all, it’s been a pretty distracting year for a rookie owner.  Banner and Lombardi don’t lack for savvy and the manner in which they’ve hung Chudzinski out to dry as if he’s the problem shows exactly how they’ve been able to exploit Haslam’s situation to bolster their own standing within the organization while continuing to keep the Browns ensconced as the embodiment of franchise malpractice.

Everyone understands that as owner Haslam has every right to hire and fire anyone he wants.  It is likewise his prerogative to put clowns like Banner and Lombardi in positions of authority and defer to them.  Similarly, if said clowns have become convinced that Chudzinski isn’t ever going to be successful as a head coach, then it’s there duty to stop a failed experiment as soon as possible instead of fiddling for another year as Mike Holmgren did with Eric Mangini.  But it’s hard to fathom exactly how Banner and Lombardi could become so convinced so quickly that Chudzinski, the man they hired, was such a mistake just as it’s hard to fathom how Haslam could so easily sign off on that without holding either of Banner or Lombardi accountable for that mistake.

Chudzinski wasn’t able to eke out any better results than any of the other Browns coaches who have come before him but the manner in which Chudzinski fell out of favor so quickly still stuns.  This Browns team was terrible.  It lacked both talent and character.  I suppose Chudzinski is being held accountable for the lack of pride with which this team went about its business this last month or so but, again, who drafted these players?  Who constructed the final roster?  Chudzinski’s fingerprints aren’t on either of those.

I guess the Browns are rebooting again but the better question is why they are even bothering to reboot.  That suggests that the systems in place are fine; they just need to be restarted to get rid of whatever bug was plaguing it at the moment.

The truth is and has been that the systems are completely broken and need to be eradicated and replaced.  This franchise doesn’t need a reboot, it needs a complete change.  Haslam promised that when he stepped into Randy Lerner’s ill-fitting shoes and simply hasn’t delivered.   What he has delivered is warmed over misfits like Banner and Lombardi who collectively have botched almost every decision they’ve faced since they were hired.

What we learned this Sunday are two things.  First, don’t count on Banner or Lombardi to save this franchise.  They’ve more than proven that their interests are purely parochial.    Survival first, last and always.

Second, we learned today how much in common Browns fans really do have with the trucking companies suing Pilot Flying J.  At the roots of each group’s frustration is that they put their faith in Jimmy Haslam and walked away feeling as if their pockets were just picked clean.
Posted by Gary Benz at 10:04 PM