The Numbing Sameness of It All, Again---Bears Edition 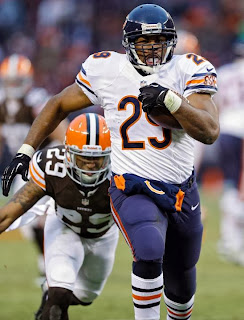 The temptation, of course, is to slap a new headline on last week’s story and call it a day.  That’s basically what the Cleveland Browns did on Sunday, losing in inglorious fashion once again, this time to the Chicago Bears, 38-31.

There wasn't anything particularly new to report, the details of this particular loss irrelevant.  Suffice it to say that the Browns blew a lead as the defense collapsed. Gee, when have I written that before?  Oh year, nearly every freakin' week.

So if the manner in which the team lose is irrelevant was there anything of relevance to ponder?  Yes.  If you’re looking for meaning in a cold city with a cold stadium and an even colder season then it is that this team continues to lose, that it continues to lose with such regularity in fact that it is threatening to undermine whatever fan base remains.

Watching the Browns lose again on Sunday in much the same manner as their other 10 losses this season, I wondered whether even the players get bored losing in the same way each week.  Either they have the deepest reservoir for absorbing boredom imaginable or they aren't bored at all.  No matter.  They are, sadly, still losers.

A defensive collapse by this team isn't news this season or any season.  It’s just what they do irrespective of the players, irrespective of the coaches, irrespective, really, of who they are playing. Maybe losing like this is habit forming as D’Qwell Jackson suggested after the game.  Maybe it just doesn't matter.  When you’re playing out another string in another meaningless season does the manner in which your next loss happens really matter?  It does but only if you’re earnestly trying to improve.

Feel free to make the case that this Browns team isn't the worst team the front office has put on the field in recent years. I’ll readily concede that this team seems more talented than in previous seasons as long as you readily concede that your point notwithstanding the results still aren't any different.  That is the numbing sameness of it all in a nutshell.

The problem with this team since its reintroduction into the league until this past Sunday starts with the quarterback and flows from there.  It’s almost hard to fathom that the Browns are no closer to having a good serviceable quarterback than at this same point during its first in 1999.  That is institutional incompetence as practiced at the highest level of professional sports.

Without a quarterback that the team or the fans can believe it, there's little to rally around.  A strong defense can win you a few games.  Perhaps your hack quarterback can do likewise occasionally.  But there is no end game except the unfulfilled belief in the results of next year's draft.

In Sunday’s New York Times sports section there was an article pondering whether the Jets, whom the Browns play this coming Sunday, will follow the same path of the Carolina Panthers and once again try to draft a franchise quarterback.  The Panthers, as most recall, drafted Jimmy Clausen late in the first round in 2011 only to watch him perform like a baby-faced Brandon Weeden.  In 2012 they conceded their mistake just one season into the experiment and drafted Cam Newton and now find themselves, in Newton’s second season, as one of the better teams in the NFL.  In doing that they did what most teams won't even contemplate—cutting losses instead of grasping to the thin reed of the potential you saw in the player when you first drafted him.  NFL quarterback may be the toughest position in professional sports but that doesn't mean that conclusions can't be drawn after a season.

This past season the Jets drafted Geno Smith in the second round.  He’s been awful in the way that only an unprepared rookie quarterback could be awful.  Think Akili Smith and you’you've essentially captured the awfulness of Geno Smith.  The Jets face the issue of whether to cut bait with Smith, just like the Panthers did with Clausen.

The Browns of course faced this issue last off season and punted, which is why Weeden started the season.  Now deep into Weeden's second season, there can’t be anyone in Berea that believes he’s a viable, reliable NFL starter.  The game just hasn’t slowed down enough for Weeden and who knows if it ever will.  Meanwhile the Browns continue to have a quarterback problem and they need to continue to turn over every rock, spend every high draft choice they have, until one is found.   Quit using hope as a strategy.

The Browns don’t need a “franchise” quarterback, for whatever that even means at this point.  They just need a guy who can consistently and efficiently manage a game, minimize mistakes and get the ball where it needs to be.  Maybe that is asking a lot. No matter.  Until that quarterback is found, the Browns will remain stuck on 4 to 5 wins a season.

Look at it this way.  In their 15th season since re-entering the league, the Browns are averaging just over 5 wins a season.  The franchise has had just two winning seasons overall.  The common denominator is the lack of a quarterback.  The correlation is near perfect.

Which brings us back to Sunday’s game.   Those brave few that continue to watch know what happened.  The defense had another, yes another, monumental 4th quarter collapse that gave the Bears 21 points, the last of which was on a 40 yard touchdown run.  This continues to be a major problem with the team but let’s also be fair: it’s not as if this collapse spoiled fine play on the offensive side of the ball.

Jason Campbell didn't lose the game.  But where he failed is where every other similarly situated Browns quarterback has failed.  He can’t win a game on his own.  He doesn't have the presence and doesn't have the skill to lift a team’s spirit and push it forward in the tough moments of a game.  He’s in very fitting company with all the other ones who have tried and failed in a Browns uniform.

Sunday Campbell helped put together a decent first drive but he couldn't finish, a consistent theme on both sides of the ball.  Campbell did throw a 43-yard touchdown pass with under a minute remaining.  The Bears were up 14 points.  In other words, it was garbage time.  What Campbell was able to do, once, was put together a drive that mattered that resulted in the Edwin Baker 2-yard touchdown run.

Is this all Campbell’s fault?  Of course not.  The holding penalty on Shaun Lauvao early in the fourth quarter negated a nice run by Chris Ogbonnaya that had taken the ball deep into Chicago territory.  The penalty ultimately pushed the Browns back far enough where they had to punt.  If that penalty doesn't happen, maybe the Browns go in for the touchdown and maybe they go up 14, just like a week ago.  But given Campbell’s play, there’s at least as much reason to think that the Browns end up getting another field goal, at best.  At worst, he throws an interception.

Either way, it was still on the defense to help make a paltry lead stand.  It was at that point where my future son-in-law leaned over to me and asked me if I thought the Browns could seal the deal for once.  How do you think I answered?

As if on a timer, the defense then collapsed.  The capper was not the Michael Bush 40-yard touchdown run.  That was icing on a cake that was fully baked.  Once the Bears had overcome the deficit and gone up by 7, the defense was waiving the flag of defeat.  It might be they lacked confidence in Campbell and the offense.  It might be that they lacked confidence in themselves.  It was probably both.

The capper was the 45-yard improbable touchdown pass to Alshon Jeffery.  What was remarkable was the fact that Cutler threw the ball in the first place.  He saw Jeffery seemingly well covered by Tashaun Gipson and Julian Posey and still figured “why the hell not?”  Why the hell not indeed.

Gipson seemed perfectly positioned in front of Jeffery.  It didn't matter.  Gipson jumped and missed and the ball landed perfectly in Jeffery’s arms.  Give Jeffery credit for good concentration certainly but that play, more than any other this season, succinctly documented this team’s massive defensive shortcomings.

Safety T.J. Ward, who had a fumble recovery for a touchdown, said that the team won't be folding in it's last two games.  Who is he kidding.  This team is neatly folded with crisp hospital corners.  It couldn't possibly fold any further.

What we’re left with then is what we’re always left with: a team without a quarterback it can believe in and a defense that’s all shit no hit.  In other words, wash, rinse, repeat.  There’s two more weeks to go.