Lingering Items--They Aren't Who We Thought They Were, Either Edition 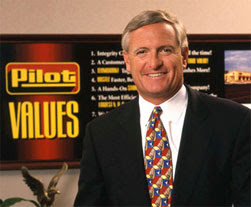 The controversy surrounding Pilot Flying J seems to change by the day.  What doesn’t is the impact any of it will have on Jimmy Haslam’s new toy, the Cleveland Browns.  It’s the great unknown.  Then again, it’s the Browns so what’s new?

The Browns have nearly cornered the market in unknowns so it’s not a huge surprise when it comes to the fortunes of the Browns that a corporate scandal involving the current owner of the Browns barely registers as a significant event anymore.  Maybe it should, assuming fans are still interested in seeing the Browns v2.0 actually succeed.

Here’s why this matters.  If you’re Browns owner Jimmy Haslam, who serves as an owner/CEO of Pilot Flying J, there’s a worst case scenario that ends up with him serving time for fraud.    Evidence could develop that implicates him in what essentially amounts to cooking the books to make the company look more profitable, putting him in the crosshairs of the criminal justice system.  If that happens he could join an ever growing prison population of corporate fraudsters.   He could also find himself in the crosshairs of NFL Commissioner Roger Goodell and his fellow owners who don’t want someone of his ilk mixing among someone of their ilk. In either case, it would most certainly put the franchise in flux once again.  In other words, it will be like the entire run of the Randy Lerner regime.

But there is no way to know at the moment how likely it might be for the worst case scenario to come to pass for Haslam.  I do know that Haslam and his team are staying up late, reading affidavits, making phone calls, and basically being embarrassed as each day they do so they uncover a little more ugliness that has caused Haslam to go from the defiant defender in his first press conference to the humbled executive in his last.  Put it this way, a company doesn’t announce a 5-point plan that involves an independent investigation, the suspension of several employees, a mea culpa on a few of the rebates and the impending hire of a Chief Compliance Officer if something hasn’t gone terribly wrong somewhere.  The only question now is the scope of the problem, not the existence.

To the extent that Browns fans should be worried about what’s happening at Pilot Flying J it’s less about Haslam personally and more about it rocking the financial underpinnings of the fortune both Haslam and the fans were counting on to support the franchise.  Fans in Cleveland already know what it’s like to have owners who don’t have the cash to play at the high rollers table.  We lived with Art Modell for years as he borrowed from one bank to pay off another while blaming the city for all his troubles.  We’ve lived with the Dolans now for years as they continue to obfuscate their own financial issues by crying about being a small market team.

The reason Haslam’s breaking a sweat at his press conferences these days is that the damaging blow to the company’s reputation and credibility directly translates to potentially less business as the Standard and Poor’s rating agency warned.  Less business means less cash to meet its expenses, including an ever increasing debt load that must be serviced.  Pilot Flying J is privately owned, mostly by the Haslam family.  A private equity group owns a little more than a third of the company.  Twice in the last 18 or so months it has taken on relatively heavy debt in order to finance a dividend payment to the owners.  The financings have been used for a variety of purposes—to pay down other debt incurred from acquisitions, for general corporate purposes and to put money in the pockets of the owners.  Some of that money, perhaps a good deal of that money, was used by Haslam to fund his purchase of the Browns.

There’s nothing wrong with any of that nor is there anything the least suspicious about it.  Taking on debt to fund a dividend to the owners of a private company is pretty common.  But that debt comes at a relatively high cost to ongoing operations.  Pilot Flying J’s corporate debt is rated below investment grade and may get lower, which means that it will be perceived as an even greater credit risk  That’s not unusual, particularly in businesses that sell fluctuating commodities like gas.  But to the investors that are funding that debt, they are taking on a higher risk and thus charge a higher interest rate.  It’s like an individual with a spotty credit rating trying to get a mortgage.  The bank might be willing to take the risk but it will charge a higher interest rate than it would to someone who is a much better credit risk.

Why this matters is that the company took on this debt confident that its business was strong.  It’s the largest operator of travel centers in the country and until about a week ago had a stellar reputation.  For the time being, that reputation is taking a mighty hit and so too will its business.  People don’t want to do business with those who might be cheating them.  If Pilot Flying J loses too much business it will have trouble meeting its debt payments and that in turn will make the entire company and hence Haslam personally more vulnerable to collapse.  And if Haslam collapses he’ll have to sell the Browns and on and on and on.

It’s too soon to speculate on the fortunes of Haslam, Pilot Flying J and the Browns but they are intertwined.  The only thing Browns fans should be worried about at the moment is how the front office will screw up this year’s draft.  Instead they should actually be worried about who might be the next owner of the Browns.  Calling Dan Gilbert….

**
Speaking of Dan Gilbert, he did a major about face this week when he re-hired Mike Brown to coach the Cavaliers.  Judging from the reaction on Twitter, this isn’t one of Gilbert’s more popular moods.  Gilbert must know how ridiculous it looks to have divorced Brown, quickly remarry and then find himself longing for his original bride. 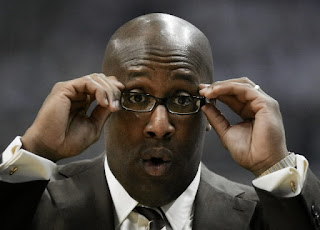 No one really knows whether it was a mistake to fire Brown in the first place and/or whether that mistake has been compounded by rehiring him.  But there are other issues about this that should be talked about, not the least of which is whether Gilbert isn’t really some closeted version of George Steinbrenner and Brown is his version of Billy Martin.

If Gilbert really made a mistake by firing Brown it was because Brown used the leverage of the 10-day window in his original Cavs’ contract to force Gilbert to make a decision.  When the Cavs bowed to the Celtics three years ago in one of the weirdest, most miserable playoff efforts LeBron James will ever have, thoughts turned immediately to what it would take to re-sign James.  No one really knew because James wouldn’t say.  The speculation though was that James didn’t like Brown.  Meanwhile Brown had a contract with an option year that had to be declined within 10-days of season’s end or else that last year became guaranteed.  Gilbert wanted more time and Brown wisely said no.  That caused Gilbert to make decisions he now says he regrets.

Well, duh.  Gilbert regrets it because he didn’t really know what might make James re-sign.  More to the point, how James felt about Brown shouldn’t have even entered into the mix.  That it did caused the cascading effect of Brown being fired and the truculent Byron Scott being hired.  Here’s a lesson for Gilbert:  if you really are going to let the inmates name their own warden then you better be sure how they really feel about the current one.  Here’s another lesson for Gilbert: never let the inmates choose their own warden.

Will Gilbert follow either of these lessons?  That’s getting increasingly hard to say.  There’s so much talk these days (and hopefully it’s just idiotic media speculation) that a factor in the rehiring of Brown was the completely illogical supposition that it would play well with James and give the Cavs an enhanced chance to re-sign him if he opts out of his Miami contract after next season.  Oy.

Disregarding the illogic of this new theory, the truth is that the chances of James coming back to Cleveland will not rest at all on who is coaching the team.  Erik Spoelstra is the head coach of Miami for God’s sake and that was almost irrelevant to James.  What James knows better than the people who cover the sport for a living is that the head coach is the least important factor in the equation in the NBA.  Talent is the difference maker and James went to Miami because he was able to have his buddies play with him in Miami because they wouldn’t play with him in Cleveland.  James saw them and not Spoelstra as his ticket to a NBA crown.  Hitler could have been the head coach and it wouldn’t have matter.  James was right.

Where a coach makes a big difference in the NBA is on a team like Cleveland that is struggling to put together the pieces.  More victories can be squeezed out through good coaching.  The Cavs for example would have had a handful more of wins if the team had simply played better defense.  Brown will help with that.  It doesn’t mean that the Cavs will suddenly become contenders.  They won’t until the talent improves significantly.

I guess it’s nice that Brown’s back but I say that only because I’m not sure what the other viable alternatives really were.  Gilbert had no interest in taking another flyer and that left only a handful of other candidates every one of whom had at least as many warts as Brown.

I think the Cavs will be better next year because of Brown but that doesn’t mean they’ll be good.  If you want to worry about something, forget about James and worry about how Brown’s defensive emphasis will play with the Cavs’ next free agent in waiting, the defense-adverse Kyrie Irving.  If Irving eventually bolts like James will Gilbert get rid of Brown again?  Put differently, how many times did Steinbrenner fire Martin?

Another new regime making draft day decisions for the Browns is the source of this week’s question to ponder:  What is the most graceful way for the Browns to end the Brandon Weeden experiment?

Thanks for a marvelous posting! I genuinely enjoyed reading it, you
will be a great author.I will make sure to bookmark your blog and will often come back from now on.

I want to encourage you continue your great posts, have a nice
holiday weekend!

One is inclusions (present within some item), blemishes (external).
Until recently, females golf apparel consisted mainly of boxy polos and
ill-fitting shorts. They refer to the cut, clarity,
carat additionally color. Vertisements., and UGG Australia was purchased created by Deckers Outdoor Consortium (1995).
http://westmichiganparanormalassociation.org/social/profile/Armando65

Ahaa, its fastidious conversation regarding this article
here at this webpage, I have read all that, so at this time me also
commenting here.